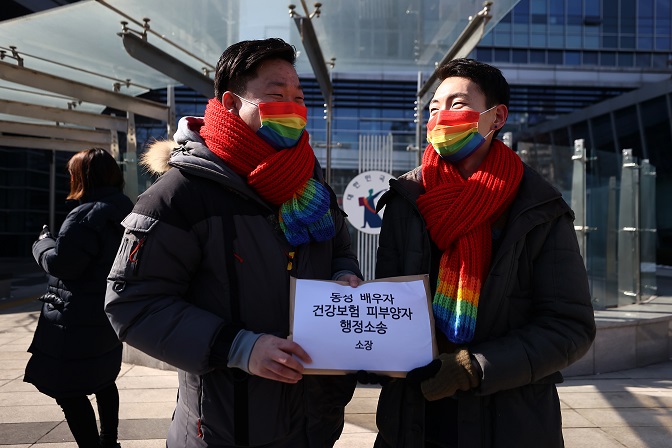 So Seong-wook (L) and Kim Yong-min, a South Korean gay couple, stand in front of the Seoul Administrative Court in southern Seoul on Feb. 18, 2021, before filing an administrative lawsuit against the National Health Insurance Service. (Yonhap)

SEOUL, Feb. 19 (Korea Bizwire) — A gay couple has sued the state health insurer for canceling its coverage of one of the partners as a dependent, an activist group said Friday.

So Seong-wook and his partner Kim Yong-min filed the administrative lawsuit against the National Health Insurance Service (NHIS) with the Seoul Administrative Court on Thursday, according to the Korean Network for Partnership and Marriage Rights of LGBT.

The NHIS first granted So coverage under Kim’s employer-based health insurance program in February 2020, but reversed the decision in October citing their same-sex marriage.

So has since been charged a separate premium, which the suit is asking the court to cancel.

He claimed at a press conference outside the court on Thursday that denying his benefits as the spouse of a subscriber in the health insurance program simply because of his gender is unfair.

By law, the NHIS grants such benefits to partners of civil unions, he noted.

“The NHIS’ core value and purpose is to improve people’s lives, so same-sex couples like us should also be protected by the system,” Kim said. “The NHIS has gone against its own values, so we plan to reclaim our rights by taking legal action.”

So and Kim have lived together since 2017 and been married since May 2019, but the country does not legally recognize same-sex marriages.