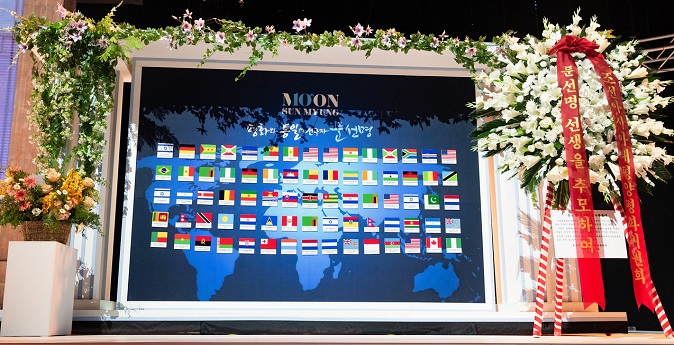 Washington, DC, Aug. 15 (Korea Bizwire) – The Universal Peace Federation (UPF) joined with other organizations, friends, and families to honor the 10th anniversary of the passing of Rev. Dr. Sun Myung Moon at a special program held near Seoul, Korea, on Aug. 14, 2022.

“Father Moon left a colossal legacy of peace of inestimable value in all aspects of human life,” said H.E. Brigi Rafini, Executive Secretary of the Community of Sahel and Saharan States (CEN-SAD), which has 25 Member States and represents 650 million Africans. “Just like Father and Mother Moon, I invite us to enter and remain in history as peacemakers in the world.”

Rev. Moon was born in 1920 in the village of Sangsa Ri in what is now North Korea. From his birth in Japan-occupied Korea to his Sept. 3, 2012, death at age 92, Rev. Moon lived every day with a passion for God, and a determination to liberate humankind from evil, and to establish an ideal world of peace.

His passing brought sorrow to countless followers and allies around the world, but none more so than his wife of 52 years. “Father, I love you. I miss you. These past 10 years have been a tremendous journey to realize the promise I made before you,” said Dr. Hak Ja Han Moon. “From now on, please do not worry. We will, without fail, complete our responsibility.”

Some 86 floral tributes and messages were sent from world leaders for the 10th anniversary, and the floral display from North Korea was so large that two men had to carry it on stage.

The North Korean message said, “Rev. Moon worked for the sake of world peace… and his achievements and legacy will be remembered for eons… We would like to wish prosperity and success to the International Family Federation and UPF.”

US Secretary of State Mike Pompeo (2018-2021) recounted the arrests, tortures, and imprisonments of Rev. Moon’s life, including the North Korean Hungnam death camp that was liberated by UN forces led by US Gen. Douglas MacArthur.

Rev. Moon survived this, and many more severe hardships, “by faith and a loving God,” said Mr. Pompeo.

In 1954, Rev. Moon created the Holy Spirit Association for the Unification of World Christianity (HSA-UWC) to call for “the unity of all Christianity and for each of us to love each other,” said Mr. Pompeo. Rev. Moon also stood immovably against God-denying ideologies, creating the successful Victory Over Communism program and newspapers, including The Washington Times, established in 1982 in Washington, D.C., to stand for faith, family, and freedom. “America must be moral, it must be strong, it must be free and have a free press,” Mr. Pompeo said.

Cambodian leaders are among those working with UPF, which was co-founded by Rev. and Mrs. Moon in 2005, in its quest to bring peace on the Korean Peninsula. In February, at the UPF World Summit 2022, world leaders signed the Seoul Resolution, which offers a roadmap to reconciliation. The resolution calls for “two states, toward one nation, one peninsula, one culture, one people,” said Mr. Yara. “This is a common vision for peace through mutual prosperity, interdependence, and universal values.”The formally named “Seonghwa Ceremony 10th Anniversary of the Holy Ascension of Sun Myung Moon, the True Parent of Heaven, Earth and Humankind,” told the story of Rev. Moon’s life, conveyed dramatically through dance, song, videos, pictures, and a live orchestra.

Highlights of the dynamic program included his 1935 Easter morning visitation from Jesus Christ who called him to carry forward the mission to build the Kingdom of God; the persecutions he endured when he started preaching; and his 1960 Holy Marriage to Mrs. Moon, after which they began sharing that “blessing” with other couples around the world. The program reviewed his thousands of speeches, campaigns, rallies, conferences, and visits held in all parts of the world, and his meetings with world leaders, including Soviet Premier Mikhail Gorbachev and North Korea Chairman Kim Il-sung. Details are found in Rev. Moon’s memoir, “As a Peace-Loving Global Citizen,” and Mrs. Moon’s memoir, “Mother of Peace: And God Shall Wipe Away All Tears from Their Eyes.”

Mrs. Moon closed the event by offering all of the nearly 30,000 attendees silken-cloth bags filled with rice caramels, one of Rev. Moon’s favorite sweets. Recalling the video clips of Rev. Moon shown in the program, she said, “True Father spoke to you, didn’t he? What did he say?”

“I’m sure he didn’t say ‘be hopeless’ or ‘lead a meaningless life,’” she said. “Let us move forward in hope,” practice true love, be stewards of the Creation, “and lead lives centered on God,” she said.
For media inquiries, please contact: