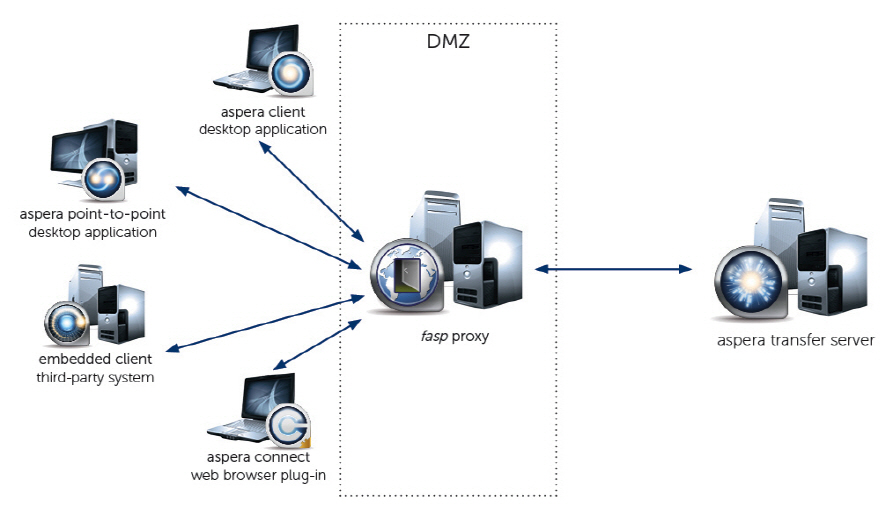 Aspera is the creator of next-generation transport technologies that move the world’s data at maximum speed regardless of file size, transfer distance and network condition. (image: Aspera)

Globecast operates Media Centres in Paris, London, Los Angeles and Singapore. It provides market-leading global connectivity via satellite and fibre including 12 teleports. Customers send their video content to one of the four Media Centres for media management, playout and distribution around the world. In many regions, customers are faced with sluggish Internet connections with high latency, making file submissions problematic using traditional transfer technologies like FTP.

To support the growing global demand for their services, Globecast initially deployed Aspera Enterprise Servers and Clients so broadcasters, studios, post-production houses and ad agencies could submit their large media files quickly and easily. Once ingested, content is edited, sent through quality control, adapted to comply with local regulations and delivered via Aspera for transmission by local cable or regional satellite providers. Additionally, files are transcoded into multiple formats, resolutions and bitrates before delivery to video on demand (VOD) or over-the-top (OTT) distribution channels, and may also be sent to post-production houses for further versioning.

Based on this early success, Globecast expanded its Aspera deployment, upgrading its bandwidth license and adding high-availability configuration to each server. “File delivery is such a key part of our operations that we cannot afford any delay, as it would have a domino effect on our workflow,” said Shakunt Malhotra, VP of engineering and technical operations at Globecast.

“Aspera enables comprehensive bandwidth management and prioritization of transfers, giving Globecast complete control over the transfer environment. The solution also provides reliability and ease of use for Globecast’s global clients who depend on getting their files to Globecast’s media hubs in a timely manner,” said John Wastcoat, VP of business development at Aspera.

Aspera will be demonstrating its full portfolio of high-speed file transfer and sharing applications at IBC 2015, Hall 7 Stand B27.

Aspera, an IBM company, is the creator of next-generation transport technologies that move the world’s data at maximum speed regardless of file size, transfer distance and network conditions. Based on its patented, Emmy® award-winning FASP® protocol, Aspera software fully utilizes existing infrastructures to deliver the fastest, most predictable file-transfer experience. Aspera’s core technology delivers unprecedented control over bandwidth, complete security and uncompromising reliability. Organizations across a variety of industries on six continents rely on Aspera software for the business-critical transport of their digital assets. Please visit http://www.asperasoft.com and follow us on Twitter @asperasoft for more information.

Globecast opens up global opportunities in broadcasting by making content distribution and management simple. Part of the Orange group, Globecast delivers tailored content management and delivery solutions to meet the needs of markets all over the world. For channels, Globecast provides media management and playout solutions as well as global content delivery via fibre, satellite, and IP. Through its fleet of SNG vehicles and production partners, the company also provides coverage of news, sports, and special events around the globe. Globecast has capacity on all the world’s major broadcast satellites, a three-continent proprietary fibre network and state-of-the-art facilities in the world’s biggest media hubs. Finally, Globecast has a content aggregation and distribution team that helps secure distribution on leading Pay TV platforms. Present in Europe, the Americas, the Middle East, Asia and Africa, Globecast offers simplicity, flexibility, and knowledge to the world’s leading broadcasters.