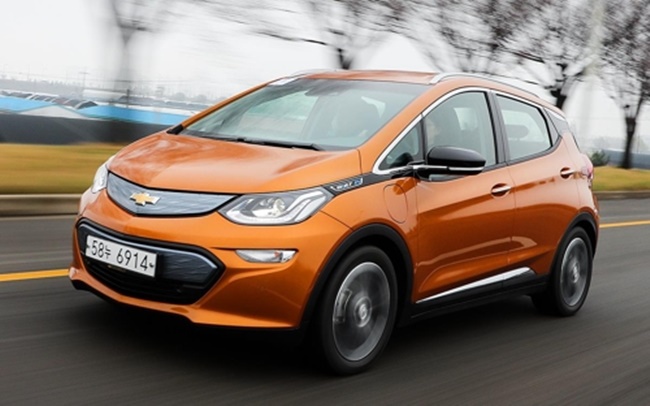 GM has four plants, a design center, a technical center and a proving ground for new vehicles in Korea. GM owns a 70.12 percent stake in GM Korea. (Image: GM Korea)

The upgraded Chevrolet Bolt EV can travel 383 kilometers on one charge of a 60 kilowatt-per-hour battery and will be sold for 27-28 million won (US$25,000-$26,000), since the government offers at least 12 million won in subsidies, a GM Korea spokesman said.

The all-electric Bolt carries a price tag between 45.58 million won and 47.79 million won depending on features if state subsidies are not included, the company said in a statement.

Last year, the Detroit-based carmaker sent only 600 Chevy Bolt EVs to South Korea, and local customers showed a strongly favorable response toward the emission-free vehicle despite a lack of charging infrastructure, the spokesman said.

On Monday, GM Korea began to accept pre-orders for the Bolt EV from local customers, with deliveries scheduled to be made from April, he said.

It takes an hour to charge 80 percent of the Bolt’s lithium ion battery at a fast charging station and nine hours and 45 minutes to fully charge the vehicle at a slow charger, GM said.

GM has four plants, a design center, a technical center and a proving ground for new vehicles in Korea. GM owns a 70.12 percent stake in GM Korea.

On the same day, Hyundai Motor Co. also started to accept pre-orders for the all-electric Kona subcompact sport utility vehicle and the Ioniq EV in a move to maintain its leading position in the domestic market, a company spokesman said.

The Kona EV is not currently in production, but the Ioniq EV is being produced at Hyundai’s main plant in Ulsan, 414 kilometers southeast of Seoul, he said.

The country’s biggest carmaker said it plans to start production of the Kona EV as early as in the first quarter for deliveries, and the Ioniq EV can be delivered after orders are received.