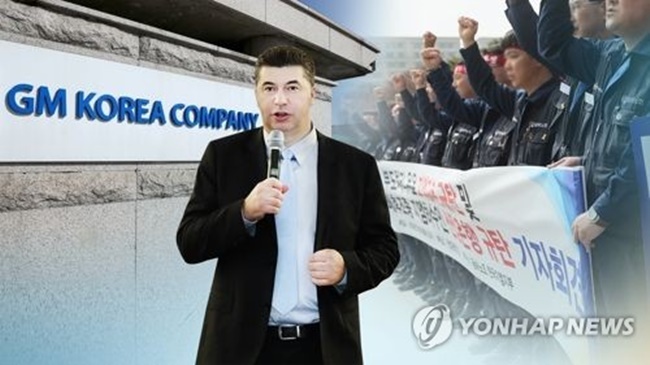 This undated image shows GM Korea President and Chief Executive Kaher Kazem (C), along with the company logo and its workers protesting against the planned shutdown of a local plant. (Image: Yonhap)

SEOUL, April 5 (Korea Bizwire) – The head of GM Korea Co., the South Korean unit of General Motors Co., said on Thursday the company now faces a cash crisis and cannot pay bonuses as agreed upon in the 2017 wage agreement.

In a message sent to employees, GM Korea President and Chief Executive Kaher Kazem said, “Given the current financial difficulty of the company, regrettably at this time we are unable to make the second lump sum payment from the 2017 wage deal.” The payment is due Friday.

As for the regular wage payment for this month, the company is making all-out efforts “to have sufficient funds to make such payments and will keep employees informed of the outlook,” he said.

In the absence of additional funding from the company’s stakeholders, GM Korea will not be able to meet all of its financial obligations this month, Kazem said.

As part of its global business restructuring, GM announced in February that it will shut one of its four car assembly plants in the country by May and has sought concessions from the union in wages and some work benefits so as to remain in operation. The demands have yet to be accepted by the workers.

The U.S. carmaker has also asked the state-run Korea Development Bank to extend a financial helping hand. The state-run lender will decide on whether it will extend fresh loans to the carmaker or not depending on the results of due diligence scheduled to be completed this month.

In the three years through 2016, GM Korea posted 1.974 trillion won in accumulated net losses due to a lack of new models and lower demand.