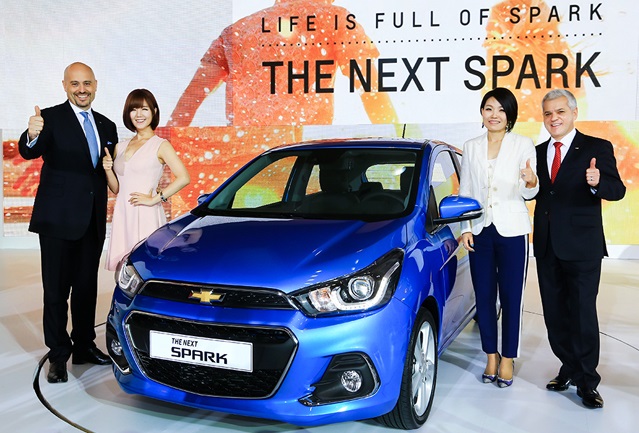 GM Korea unveiled “The Next Spark” on July 1, and began taking preorders for the lightweight model. Deliveries of the new car are expected to begin in August.

Currently, Kia Motors’ Morning is dominating the market with a 52 percent market share as of May, while the Spark is the runner-up with 32 percent. The remaining 16 percent goes to another compact car model from Kia, the Ray.

However, GM Korea set an ambitious goal of becoming Korea’s No. 1 automaker in the compact segment by rolling out the new Spark.

First unveiled at the 2015 Seoul Motor Show in April, the new Spark is the first completely redesigned model in six years after GM Daewoo’s Matiz Creative. It has adopted an aerodynamic streamlined design, and is equipped with an Eco Tech 1-liter, three-cylinder gasoline engine and C-Tech automatic transmission.

In addition, The Next Spark is embedded with cutting-edge safety options such as a front collision avoidance system, a lane departure warning system, and side blind spot alert system.

Meanwhile, to defend its dominance in the compact car segment, Kia Motors is reinforcing its marketing activities by increasing discounts and low rate financing plans. Once GM Korea rolls out the new model, Kia is expected to offer a bargain sale of its Morning model, igniting a “compact car war” in the market.