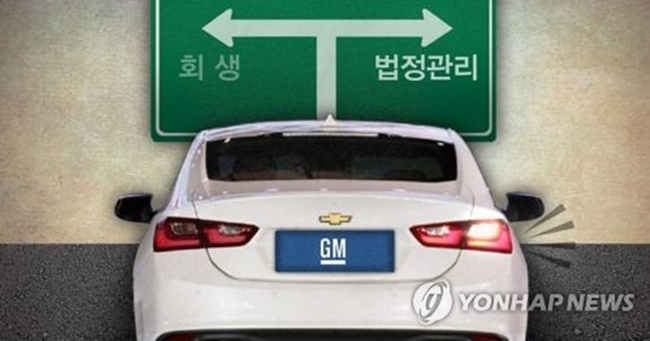 This graphic shows a Chevrolet vehicle with a license plate reading “GM” facing a choice between rehabilitation on the left and court receivership on the right. (Image: Yonhap)

SEOUL, April 18 (Korea Bizwire) – General Motors Co. on Wednesday offered to relocate workers from the South Korean plant it plans to close next month to other local production lines in an effort to get the union to accept the restructuring plan laid out by management.

The suggestion comes against a background of strong resistance from GM Korea Co.’s union to the U.S.-based carmaker’s decision to shut its plant in Gunsan, 270 kilometers south of Seoul. In February, GM called on the union to agree to a wage freeze, no bonuses and a suspension of some work benefits so the carmaker can stay afloat in the country.

In response to the union’s refusal to accept the entirety of the self-help package, GM warned that there is no option but to put GMKorea under court protection if no breakthrough is reached by Friday.

In the ninth wage negotiations held at the carmaker’s main Bupyeong plant, just west of Seoul, GM Korea proposed the gradual relocation of a certain number of the remaining 680 workers at the Gunsan plant to three plants in Bupyeong and Changwon, a company spokesman said over the phone.

But the company didn’t give the number of workers who may be transferred or provide any time frame for the relocation.

GM Korea has offered a voluntary retirement package for Gunsan workers, as most of them cannot be relocated. Some 1,920 out of the 2,600 Gunsan plant workers filed for the previous retirement program and quit the company with a severance package.

The company has also asked for financial support from all stakeholders, including the state-run Korea Development Bank, its second-biggest shareholder.

Over 2,600 GM Korea workers out of a workforce of 26,000 have filed for voluntary retirement, as the carmaker has stepped up the restructuring of its loss-making Korean operations.

If the remaining Gunsan plant workers are not included in the relocation program, they will be put on unpaid leave, the spokesman said.

The union, meanwhile, said it cannot accept the company’s position on the restructuring issue.

“As we see a maximum of 100 workers could be transferred to other plants, the company means 580 workers must leave the company under a severance package that includes advance payment of salaries,” a union spokesman said.

The company and the union will hold talks on Thursday, one day before the deadline.