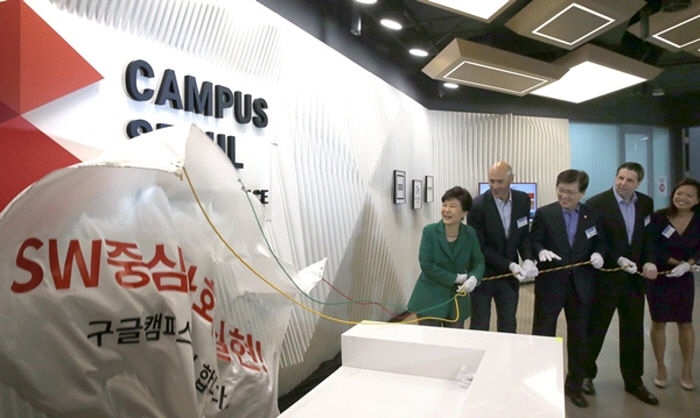 Speaking at the opening ceremony, President Park Geun-hye thanked Google for picking Seoul as the venue for its first Asian campus for tech start-ups. (image: Yonhap)

SEOUL, May 8 (Korea Bizwire) — U.S. Internet giant Google Inc. opened its first Asian campus for start-ups and entrepreneurs in South Korea on Friday as part of efforts to provide more business opportunities for them.

With the size of 2,000 square meters, the Campus Seoul in the posh Gangnam district in the southern part of the capital currently accommodates eight firms, boasting various facilities from meeting rooms to lactation rooms for female entrepreneurs breastfeeding. The number of firms are set to rise down the road, Google said.

Start-ups will be able to receive consulting services from Google experts, and have opportunities to exchange ideas with overseas firms based on other campuses. They will also have the chance to join lectures related to various business issues, such as marketing, finance and technology.

Speaking at the opening ceremony, President Park Geun-hye thanked Google for picking Seoul as the venue for its first Asian campus for tech start-ups.

“I am very pleased that Google, focusing on the growth potential of South Korea developers and venture firms, has opened the world’s third, and Asia’s first, campus,” President said. “The opening of the Campus Seoul is an excellent choice by Google.”

The launch came around nine months after the U.S. search giant announced its plan to open a campus for start-ups in South Korea.

The first campus was launched in London in March 2012, and the campus in South Korea is the firm’s third. A campus was also opened in Tel Aviv, Israel in December 2012. Google said the project’s global network provides participants with a wide choice of opportunities.

Around 1,000 entrepreneurs from 28 countries knocked on the doors of the Campus Seoul during a three-week test run, with females accounting for 22 percent, Google said.

Mary Grove, Director of Google for Entrepreneurs, said start-ups supported by the Campus London generated more than 1,800 jobs over the past three years and won a combined US$110 million investment, adding South Korean firms are also anticipated to post such robust performances.

Google will add more Campuses in Spain, Brazil and Poland by the end of this year.