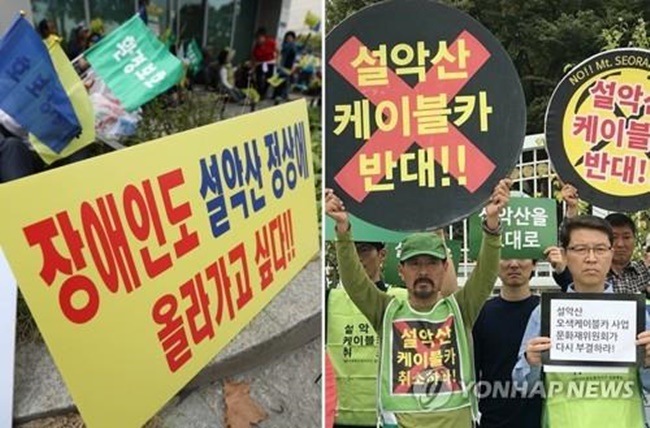 This combination of two photos, both taken on Sept. 27, 2017, shows activists (R) protesting against a project to build a cable car in the southern region of Mount Seorak on the country’s eastern coast and residents (L) calling for approval of the project. (Image: Yonhap)

SEOUL, Oct. 25 (Korea Bizwire) – An advisory panel to the cultural heritage authorities on Wednesday rejected a plan to build a cable car on a mountain range on the country’s east coast, citing possible damage to the environment, wildlife and cultural assets.

The Cultural Properties Committee voted down the controversial scheme to construct a 3.5-kilometer-long cablecar system in the southern region of Mount Seorak in Yangyang County, some 215 kilometers east of Seoul.

The panel affiliated with the Cultural Heritage Administration(CHA) had already rejected the project in December, saying it is highly likely to have a negative impact on the national park’s cultural properties.

But in June, the Central Administration Appeal Commissionunder the Anti-Corruption & Civil Rights Commission demanded the agency permit the project in response to the local government’s appeal.

Officials said the CHA is unlikely to accept its advisorypanel’s latest decision, which is not legally binding.

“By law, it is impossible for us not to follow a decision by the Central Administration Appeal Commission. We aren’t sure when to approve the construction,” said an official from the CHA.

The agency would request the county come up with a plan with the least intervention of nature and habitats, the official said.

The cable car system is designed to offer a means of convenient transportation all the way up to the peak of the Osaek area hiking trail.