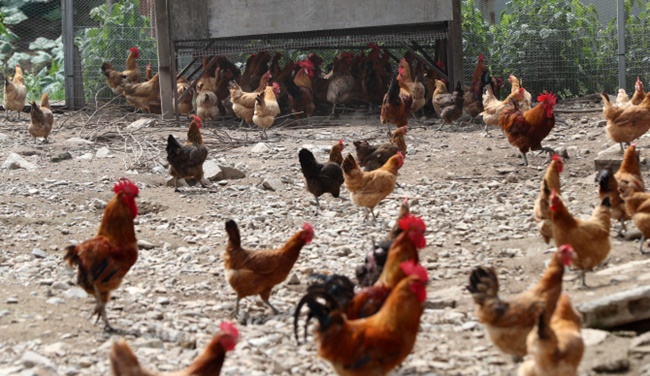 Under the new legislation, new farms in South Korea will be required to maintain a maximum animal density of one animal per 0.075 square meters of land from next month, while existing farms have until 2025 to implement the changes. (Image: Yonhap)

SEOUL, Dec. 27 (Korea Bizwire) – After a year marked by a series of bird flu outbreaks, South Korea will continue efforts to improve the living conditions of farm animals going into next year.

According to a comprehensive plan announced on Wednesday, the government will implement a number of measures next year, including the adoption of EU standards for livestock density, and new health and safety standards for animal abuse and air and light pollution.

Under the new legislation, new farms in South Korea will be required to maintain a maximum animal density of one animal per 0.075 square meters of land from next month, while existing farms have until 2025 to implement the changes.

Unlike the EU, which gave farmers a grace period of 10 years, South Korean farmers have only seven years to make the appropriate changes, with the government accelerating efforts to put an end to bird flu outbreaks heavily linked to so-called factory farms.

Other efforts by agricultural authorities will see the government cover 30 percent of the expenses for building animal-friendly farms from next year, while subsidies will also be provided from 2019.

In order to curb poultry ticks, which were behind the major ‘pesticide egg’ scandal in the country earlier this year, a special health team will be trialed in 2018, while a department dedicated to animal health control will be launched in 2019 to provide professional pest control for farms.

While personalized manuals will be distributed to raise awareness of the use of pesticides, egg farms will be put under scrutiny from next year, with agricultural authorities expected to conduct around 2,200 tests at both traditional markets and online shopping malls, up from 449 this year.

The certification process for environment-friendly agricultural products will also go through a number of changes after the tumultuous year.

Standards will be strengthened for Good Agricultural Practice (GAP) and Hazard Analysis Critical Control Points (HACCP) in addition to the use of pesticides and antibiotics when assessing the environmental-friendliness of agricultural products, with the safety tests occurring twice a year.

South Korea was hit with a series of bird flu outbreaks this year, which led to countries like Vietnam and Hong Kong banning South Korean eggs.