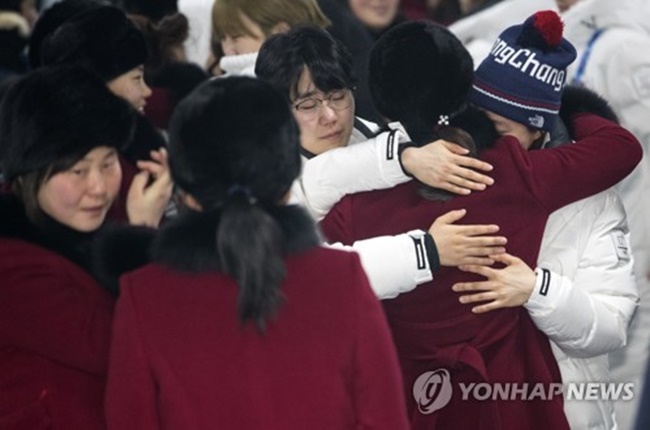 South Korea and North Korean ice hockey players, who earlier formed a joint women’s hockey team for the PyeongChang Winter Olympic Games, say farewell to each others as the North Korean players get ready to return home from Gangneung, South Korea, on Feb. 26, 2018. (Image: Yonhap)

SEOUL, Feb. 26 (Korea Bizwire) – The government on Monday dismissed reports of a possible dispute with North Korea at the PyeongChang Winter Olympic Games, which was evident to some in the separate entry of their athletes at the closing ceremony, saying there had been no plans for a joint entry in the first place.

“There simply is no such thing as a joint entry at closing ceremonies,” said Kwun Hyuk-ki, a press secretary at the presidential office Cheong Wa Dae who also acted as a deputy chief of a government support group for the PyeongChang Olympic Games that ended Sunday.

“The agreement between the South and North Korea on a joint entry has also been limited to the opening ceremony,” he added.

The remarks came after media reports suggested the divided Koreas failed to march their Olympic athletes together under one flag symbolizing a unified Korea due to a dispute over North Korea’s demand for ice hockey equipment used by its athletes, who played as part of a single unified women’s team.

The Cheong Wa Dae official dismissed any such dispute, saying the North Korean athletes had been aware all along that the equipment had only been lent to them.

Partly confirming their amicable ties, South Korean and North Korean athletes marched side by side at the closing ceremony, which was also attended by a high-level North Korean delegation led by the communist state’s point man on South Korea Kim Yong-chol.

South Korean President Moon Jae-in also praised the North’s participation in the PyeongChang Olympics during a meeting with the North Korean chief delegate held just hours before the closing ceremony, according to his spokesman Kim Eui-kyeom.

“President Moon highly evaluated that the PyeongChang Olympic Games were held safely as North Korea celebrated the event by sending delegations to the closing ceremony, as well as the opening ceremony,” the spokesman said earlier.