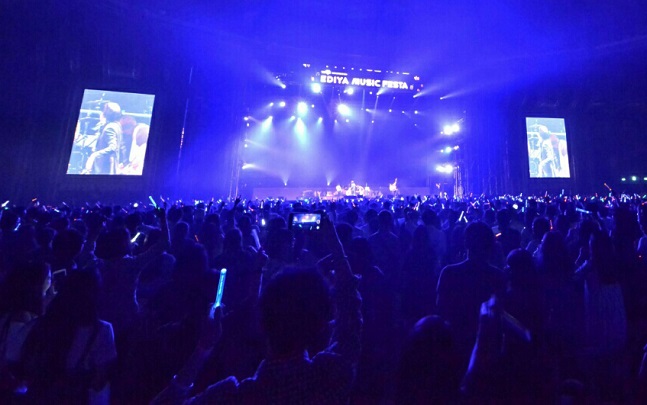 This file photo from May 22, 2016, shows a K-pop concert stage at the Olympic Gymnastics Arena in Seoul. (Yonhap)

SEOUL, Sept. 28 (Korea Bizwire) — The government on Monday announced a set of measures to better protect the rights of underage celebrities, as more young people are pursuing dreams of a career in entertainment.

Under the measures, the Office for Government Policy Coordination (OGPC) said it plans to require entertainment companies to more readily and transparently disclose information on their business activities, and to strengthen supervision of their operations.

The government also plans to draw up industry-wide guidelines for auditions and have audition-related information, which is often relayed secretively or through word of mouth, be made available publicly on websites of entertainment-related trade groups, according to the OGPC.

The office said it has reported the comprehensive plan to improve policies in advancing labor rights of non-adult celebrities and aspirants to the Government Performance Evaluation Committee on Sept. 18.

The plan was produced jointly with the culture ministry and the Korea Communications Commission.

Production of a standard contract regarding underage celebrities’ television appearances was included in the plan. Officials also aim to establish an industry-wide production guideline that stipulates working conditions of non adults during television filming.

Psychological counseling programs for young celebrities, many of whom become public figures at an early age, will also be expanded.

To this end, the state-run Korea Creative Content Agency plans to expand the number of participants in its entertainment industry career counseling program from the current ceiling of 100 to 350.

“From the plan, we will sort out whether the items can be pursued immediately, such as drafting guidelines, introduced through governmental ordinances or require new legislation through parliament,” an OGPC official said.

The plan was announced after the South Korean government pledged earlier this year that it will focus on further nurturing local creativity and the global sales of Korean cultural content, following the historic global successes of homegrown movie “Parasite” and K-pop groups such as BTS.

The culture ministry said it will pour a total of 1.69 trillion won (US$1.42 billion) into assistance funds to help local content creators better finance their projects, including an 80 billion-won venture investment fund dedicated to supporting pioneering projects.