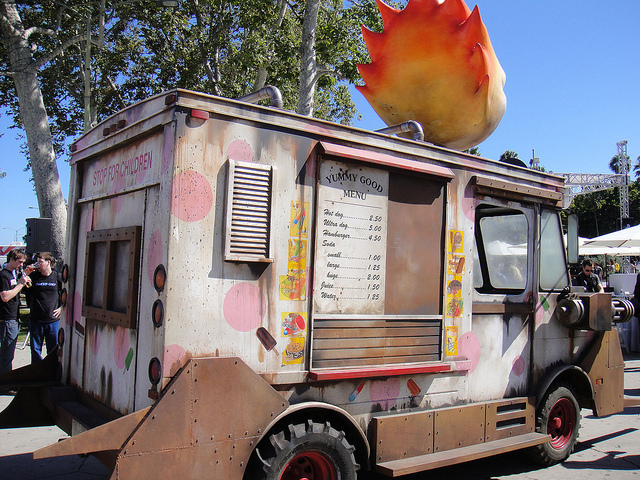 The government will revise laws by this July so that food truck operators can sell foods and beverages from their customized trucks. (image: Doug Kline/flickr)

SEOUL, Korea, Mar 31, 2014  (Korea Bizwire) — The food truck that can be found in amusement parks and street corners selling hot dogs, sandwiches, and coffee will be run legitimately from the second half of this year.

From May this year, Internet users can buy goods online without the cumbersome ActiveX-based public key certificate system. In addition, laws will allow tourist hotels to be established next to schools and other educational facilities.

In a meeting of economic ministers on March 27 presided over by Prime Minister Hyun Oh-seok, as many as 41 regulations out of 52 recommended for abolition by a regulatory reform ministers meeting held last week were passed for implementation. Of these, 27 regulations will be lifted before the first half and the remaining 14 before the year’s end.

Quoting Laozi, the Prime Minister said, “The more prohibitions there are, the poorer the people will be” and added, “The government will push forward with the deregulation drive with a belief that absurd regulation is shackles that keep the economy from running faster.”

As part of the drive, the government will revise laws by this July so that food truck operators can sell foods and beverages from their customized trucks as long as the trucks have a minimum cargo space of 0.5 square meter.

In addition, automobile customization will be permitted as long as the custom job wouldn’t compromise the car’s safety. With this change, there will be many vans turned into RVs for camping.

Beginning this May, the government will revise laws on e-commerce in ways to eliminate the need for public key systems for secure online transactions. Separately, the government will allow online retailers to establish websites that do not require the installation of ActiveX that has been the source of complaints by foreign online buyers of Korean goods.