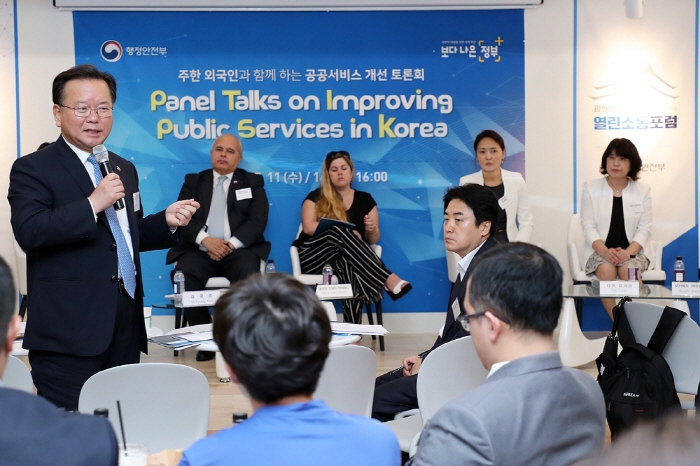 SEOUL, Jul. 12 (Korea Bizwire) — A discussion on the difficulties foreign residents face in South Korea was held yesterday at the Central Government Complex in Seoul.

Titled “Panel Talks on Improving Public Services in Korea” and hosted by the Ministry of the Interior and Safety, the discussion was held by top foreign dignitaries residing in South Korea as well as regular workers holding international passports.

The talks were divided into two sessions. The first session dealt with ways to improve the difficulties that the international residents face while living in Korea.

The second session addressed problems in doing business and experienced by foreigners.

One example that was brought up by the discussion panel during the talks was being asked to provide a passport for ID at government agencies and banks, even after submitting an alien registration card.

Another inconvenience that foreigners experienced was the lack of a support group in government entities that catered to foreign residents in Korea.

Government officials who were on hand to answer the questions stepped up to offer their opinions on the matters.

A representative of foreign residents in South Korea said that the talk enabled foreigners to voice their opinions on various inconveniences that are typically experienced by expats.

Kim Bu-gyeom, the Minister of the Interior and Safety, said that the Ministry will work together with other government divisions to reflect the recommendations in various government policies.