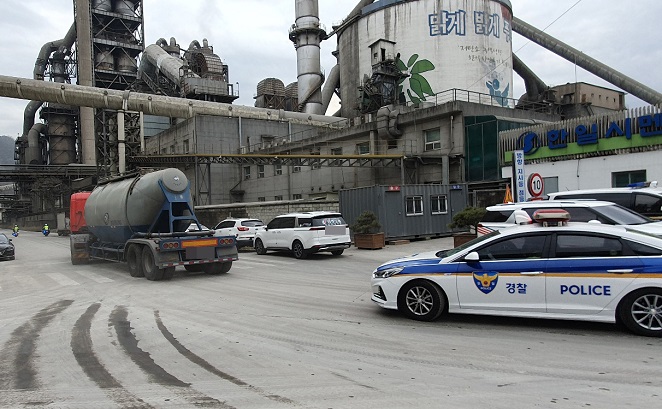 In this photo taken Nov. 28, 2022, a bulk cement trailer departs from a cement plant in Danyang, North Chungcheong Province, under the protection of police amid an ongoing strike by cement truckers. (Yonhap)

SEOUL, Nov. 29 (Korea Bizwire) — South Korea invoked a return-to-work order on truckers of the cement industry, the finance minister said Tuesday, pointing out their on-going strike weighs down on the national economy.

The decision came as thousands of truckers have been on a strike since Thursday, demanding the government extend temporary rules guaranteeing minimum freight rates, which they call “wage for safe operation.”

he rules are set to expire at the end of this year.

“At a time when we need to join forces to overcome the economic crisis, the Korean Public Service and Transport Workers’ Union has taken the livelihood and the economy as hostages, suspending logistics and shaking the ground of industries through baseless demand,” Finance Minister Choo Kyung-ho said.

“If we do not sternly cope with illegal group activities under the rule of law and principle, and sit idle on the livelihood, logistics, and industries, it will become impossible to overcome the economic crisis,” Choo added.

The finance minister said the cement supply has dropped more than 90 percent due to the strike, while 50 percent of construction sites in need of ready-made concrete face disruptions.

Choo warned the government plans to take stern measures on drivers failing to follow the order.

The Ministry of Land, Infrastructure and Transport said it will deliver the return-to-work order to 209 companies that have business contracts with about 2,500 cement truckers Tuesday afternoon.

The strike is the second of its kind in five months. On the previous day, the government raised its warning of a cargo transport disruption to the highest level.

The government and the truckers held their first negotiations Monday but failed to narrow differences.

On Wednesday, the government and the striking truckers are set to hold their second talks, but the two sides indicated only slim prospects for progress in the negotiations.

The striking truckers are expected to demand the government withdraw the return-to-work order on truckers of the cement industry.

However, Kim Soo-sang, head of transport and logistics office at the land ministry, said the order “continues until the collective denial of transport is terminated.”

Under the law, the land minister is entitled to invoke the order against striking truckers when the national economy is at risk due to their move.

Anyone defying the order can be punished with up to three years in prison or a fine of up to 30 million won (US$22,500). South Korea had no record of issuing such an order since the relevant law was enacted in 2004.