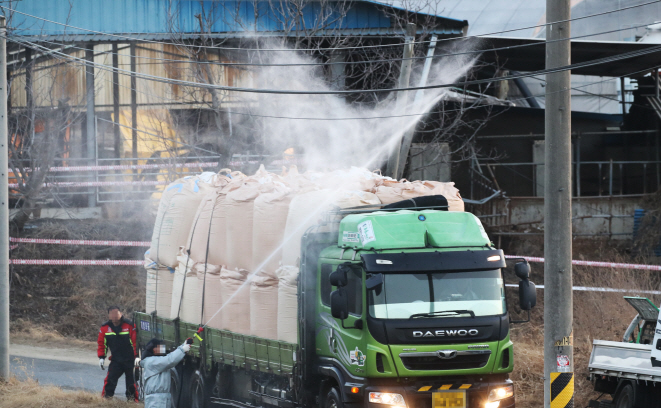 Quarantine officials disinfect a truck in Anseong, 80 km south of Seoul, where an FMD case was reported at a dairy farm on Jan. 28, 2019. (Yonhap)

The Ministry of Agriculture, Food and Rural Affairs said it increased the severity of the alert, to the second-highest level, after two FMD cases were reported in Anseong, 80 kilometers south of Seoul.

The notice took effect as of 2:00 p.m. South Korea has a four-stage alert system on FMD.

Under the level, the minister takes charge of a situation room, and disinfection centers are installed on major roads connecting to Anseong and neighboring areas.

The government may also consider closing down animal markets depending on the development of the situation.

Owners and workers of animal farms in the region are banned from meeting each other in person for fear contact can cause the disease to spread.

On Monday, the ministry confirmed a FMD case at a dairy cow farm in Anseong, with one more case being reported a day later at a beef cattle farm. The two farms are 10 kilometers apart.

The ministry said the two cases appear to be related, and that the disease probably spread through vehicles.

The government said it is culling animals from establishments run by the owner of the problematic “hanwoo” farm, and is thoroughly checking 14 neighboring farms within a 500-meter radius. Hanwoo is a kind of premium Korean beef.

The ministry is also conducting a precautionary culling of animals within the boundaries of the farm where the first case was reported.

Animals in nearby provinces are receiving vaccinations, it added.

The ministry urged people to cooperate with the preventive measures even if they cause inconvenience, claiming they are unavoidable in dealing with the outbreak.

The ministry is making efforts to fully bring the situation under control, as around 30 million South Koreans are expected to travel around the country during the Lunar New Year holiday next week.

If owners of farms with FMD cases are found to have failed to vaccinate animals, or to have not properly taken precautionary measures, the ministry said it can impose fines of up to 10 million won (US$8,952), with those farms’ state compensation, for losses caused by the culling, reduced by 40 percent.