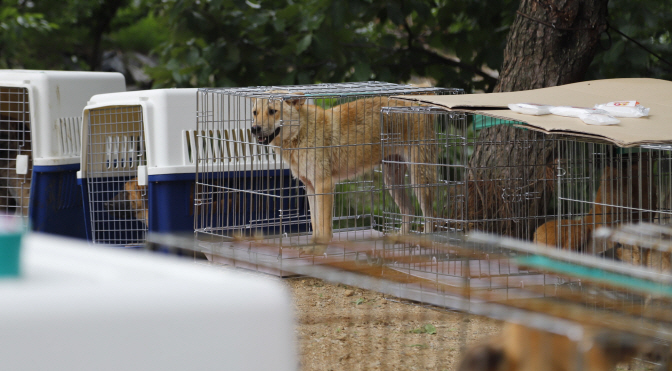 The activists claimed that they had rescued 64 dogs that were left unattended at a farm in Yangsan, South Gyeongsang Province, but that animal shelters are already full and cannot accommodate additional abandoned pets. (Yonhap)

SEOUL, May 13 (Korea Bizwire) — Animal activists who rescued 60 dogs that had been left at a dog farm held a press conference at the fifth exit of the National Assembly building in Seoul at noon on May 11 and demanded that the government take responsibility and protect rescued animals that need emergency relief.

In an appeal to the government, the activists claimed that they had rescued 64 dogs that were left unattended at a farm in Yangsan, South Gyeongsang Province, but that animal shelters are already full and cannot accommodate additional abandoned pets.

They further explained that they have been protecting the rescued dogs with their own money, but now the expenses far exceeded the amount that activists could afford.

The activists noted that even though there is a law on animal protection, rescued animals have nowhere to go. “The state, not individuals or private organizations, should be responsible for the animals”, the activists claimed.

Of the 64 rescued dogs, 20 were taken to hospitals for treatment after a prospective adoptee showed up. Animal activists brought the remaining 40 to the press conference.

The activists plan to reveal the absurd reality to the world, while criticizing the government and the National Assembly for not facing up to the reality of South Korea, where illegal dog farms and horrendous slaughter are tolerated.

Meanwhile, animal activists plan to set up tents in front of the National Assembly and continue their rallies indefinitely until government measures to protect rescued dogs are implemented or potential adoptees appear.