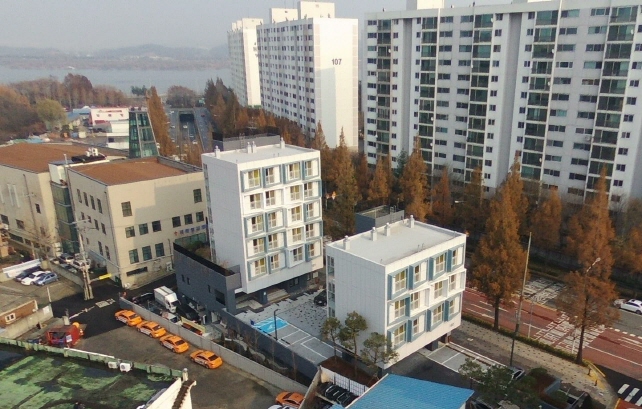 Modular housing for taller residential buildings is a national R&D project, and it is the nation’s first project in which buildings 13 stories or higher will be designed and built through modular construction. (image: Ministry of Land, Infrastructure and Transport)

SEJONG, Jun. 24 (Korea Bizwire) — The Ministry of Land, Infrastructure and Transport announced it will invite local governments and public housing operators across the country to public housing sites needed for the “Property Project for Mid to High-Rise Modular Housing” by August 22.

Modular housing refers to a method of building a unit structure in a form similar to a Lego block and installing 60 to 70 percent or more of its structural parts, such as windows, exterior walls and electric wiring, that are assembled first at a factory, then at the site of the unit structure.

Modular housing for taller residential buildings is a national R&D project, and it is the nation’s first project in which buildings 13 stories or higher will be designed and built through modular construction.

The final site for construction will be selected by an evaluation team formed by the Korea Institute of Civil Engineering and Building Technology after a written review, presentation of proposals and on-site verification assessment.

So far, only low-rise modular homes with a height of six stories or less have been built in South Korea.

Therefore, if the project goes smoothly, it is expected to be the first case of middle and high-rise modular housing with more than 13 stories in the country.

“Modular engineering has many advantages such as a reduction in the period of construction, uniform quality due to factory production, and a reduction of dust at construction sites,” a ministry official said.

The official added that “pre-fabricated construction” will likely be popular in the future, especially when experience in modular building for middle and high-rise households is accumulated.