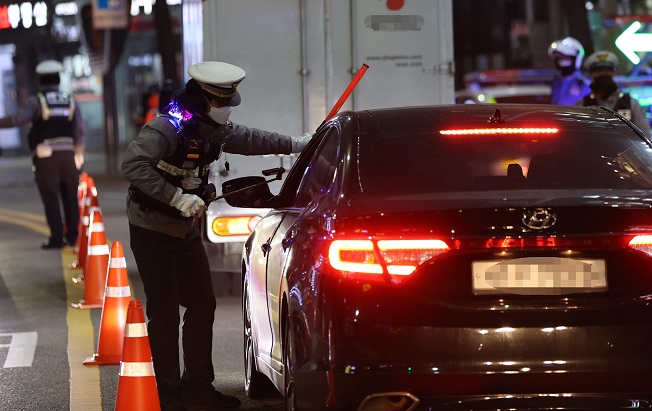 This file photo, taken on Nov. 27, 2020, shows a police officer conducting a breathalyzer test on a car driver in Seoul. (Yonhap)

SEOUL, Jan. 4 (Korea Bizwire) — A government decision to reject a foreign national’s naturalization application citing a drunk driving conviction has been ruled lawful by a Seoul court, according to judicial sources Monday.

According to the sources, the Seoul Administrative Court recently overturned a Nepali national’s request to rescind the justice ministry’s rejection of the person’s naturalization due to a driving under the influence (DUI) conviction.

The Nepali had filed litigation against the justice minister after being denied naturalization in February last year. The justice ministry referred to the Nepali’s conviction as an “disorderly conduct.”

The person, who has lived in South Korea under a marriage visa since 2014, applied for naturalization in May 2018. The application was denied after a local court sentenced the person with a fine for DUI in November 2019.

The Nepali claimed that the DUI incident occurred after discovering that his spouse, who had also drunk together at a social gathering, appeared unconscious and presumably in critical condition inside a car and needed to be immediately transferred to a hospital.

But the court said the plaintiff seems to have misjudged the spouse’s condition that was apparently due to excessive drinking, ruling in favor of the government decision.

“DUI incidents during an evaluation period for granting citizenship are considered an act which makes it difficult for the country to accept the plaintiff as a part of its community,” the court ruling said.

The court explained that foreign nationals can apply for naturalization on multiple occasions without limitation, saying that the plaintiff could have the opportunity to become a Korean citizen after staying out of trouble for some time.