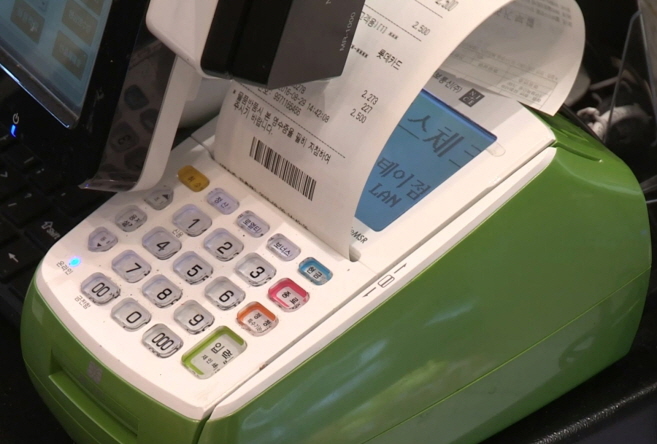 The total for the country as a whole stood at 12.9 billion receipts worth 11.9 billion won (US$9.8 million), with the amount of paper trash created hitting 1,079 tons. (Yonhap)

SEOUL, Aug. 29 (Korea Bizwire) — The South Korean government and large retailers on Thursday agreed to work together to stop using paper receipts that are wasteful and harmful to the environment.

At a gathering in Seoul, top policymakers from the finance, science and environment ministries along with representatives from 13 retailers, such as E-Mart, Lotte Mart and all four department stores, concurred on the need to change the way receipts are issued.

Findings by the Ministry of Environment said that paper receipts are not only a waste of resources but can inadvertency cause personal information theft.

It stressed that many countries in North America and Europe are opting for other means to confirm payment.

The total for the country as a whole stood at 12.9 billion receipts worth 11.9 billion won (US$9.8 million), with the amount of paper trash created hitting 1,079 tons.

This translates into 2,641 tons of greenhouse gases being spewed into the air to make the paper.

The finance ministry said it plans to ease current rules on mandatory issuing of paper receipts, with the science and ICT ministry to move towards the establishment of a viable electronic receipt.

Retailers are also pushing to set up specialized mobile apps that can replace paper receipts or give customers the option not to ask for a paper receipt at the counter.

“With concerted effort, the paper receipts that are issued can be greatly reduced, which will be beneficial to companies, consumers and the country as a whole,” a government source said.