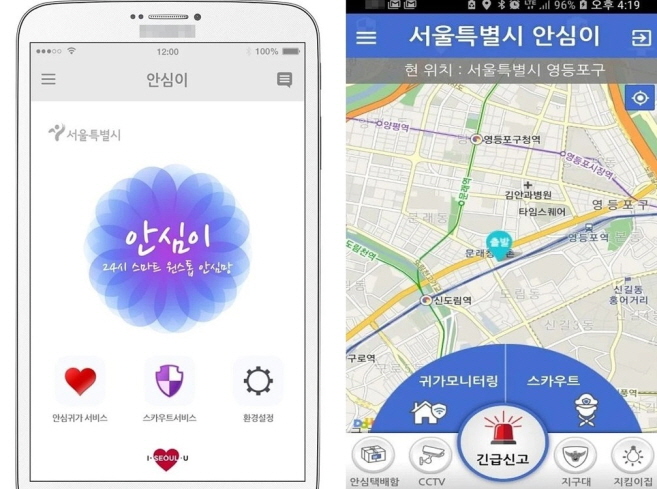 Ansimi App is connected to some 40,000 closed-circuit television feeds installed across Seoul to monitor real-time situations and provide rescue support at all times. (Yonhap)

SEJONG, June 25 (Korea Bizwire) — The Women’s Safety App, currently available only in Seoul and Anyang, will be improved for nationwide coverage as authorities seek to reduce violent crimes against women returning home at late hours or those living alone.

The Ministry of Land, Infrastructure and Transport (MOLIT) and the Ministry of Gender Equality and Family agreed to establish a ‘smart city safety net’ that connects MOLIT’s smart city integrated platform with the Women’s Safety App developed to protect women.

The new initiative will connect CCTV feeds, the Women’s Safety App, and 112/119 situation rooms to a smart city center available in each region.

The Women’s Safety App, called ‘Ansimi,’ activated by shaking a smartphone or pressing a shortcut button, sends signals to nearby CCTV cameras to quickly monitor the situation and report back to the police.

The app, however, worked only within certain administrative regions. For instance, a Seoul citizen wouldn’t be able to use the app outside of Seoul.

To tackle this problem, MOLIT began a compatibility project for the Women’s Safety App in Seoul and Anyang in November, aiming for nationwide coverage by later next year.

The new initiative will enable smart city centers to locate app users in danger through nearby CCTV cameras across the entire country, and work side-by-side with the police and the fire agency for quick action.

When emergencies arise, the center will locate the app user through the Women’s Safety App, transferring footage from nearby CCTV cameras to the police to address crime scenes in real-time.

The new initiative comes as the increasing number of crimes against single-person female households is causing social unrest.

Seoul reported that 36 percent of women in their 20s and 30s living alone feel threatened in their own residential area.

Among them, 45.3 percent pointed out the lack of safety infrastructure, including CCTV cameras, security facilities, or guard windows.