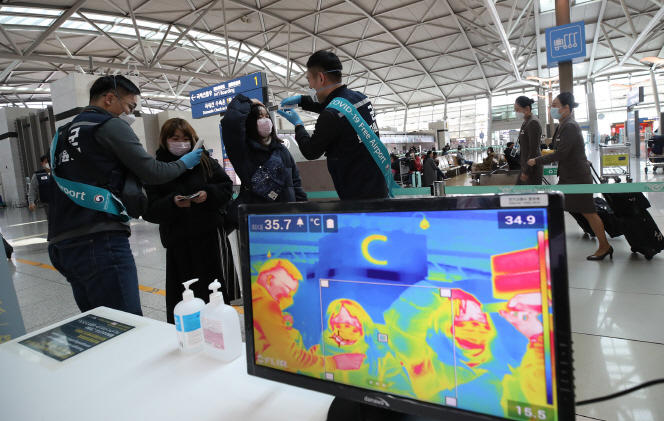 Passengers at Incheon International Airport in Incheon, just west of Seoul, are checked for fever on March 6, 2020. (Yonhap)

SEOUL, March 10 (Korea Bizwire) — The government will begin fever checks and other health examinations this week on passengers heading to the United States, an official said Tuesday, amid rising concerns over the spread of the new coronavirus in America.

Starting at midnight Wednesday, government officials will undertake the examinations, which have so far been conducted by airlines, to ensure they will proceed “in earnest and in a more systematic manner,” the foreign ministry official said.

Twenty-eight and 16 quarantine officials will be dispatched to the airports in Incheon and Busan, respectively.

At the facilities, passengers are to undergo fever checks and fill out health questionnaires. If they do not have fevers of 37.5 C or higher, they will be given quarantine certificates that will allow them to get boarding passes.

Should they have high fevers, they would be sent home after a health care briefing. If they are diagnosed with the virus, they will be quarantined.

“From the perspective of the partner country, it can have greater confidence in such a systemic program rather than the program voluntarily conducted by the air carriers,” the official told reporters on condition of anonymity.

The quarantine efforts came as the U.S. government has been urging its citizens to reconsider travel to South Korea under an elevated travel advisory due to the COVID-19 fears, with its health authorities recommending that Americans avoid all nonessential travel here.

Since late last month, South Korean air carriers have conducted body temperature checks on all passengers aboard their flights bound for the U.S. and strengthened in-flight disinfection efforts.

The health examinations on outbound passengers are part of efforts to prevent any possible outflow of the virus from Korea, the official said.

In addition, Seoul has barred some 17,000 people, who have been confirmed to have the virus or contacted patients, from leaving the country.

Meanwhile, the ministry official said that currently, South Korea is not yet seriously considering sending chartered flights to bring home its citizens in Italy, which has announced a plan to restrict movement in the entire country to contain the novel virus.

“We have found that despite the restrictions, if one has a flight ticket, he or she is able to move to the airport at this point,” the official said.

“So we are not yet at the stage to specifically consider sending flights to Italy, but we will continue to look at the possibilities depending on the situation.”