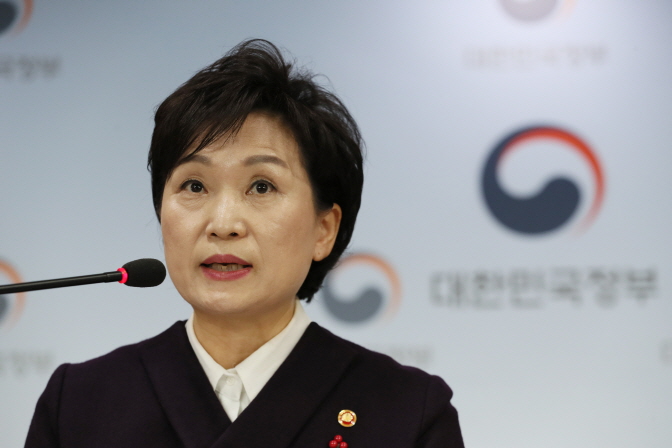 Land Minister Kim Hyun-mee delivers a briefing on the government’s plan to create 155,000 public homes and the sites for them during a press conference held at a government complex in Seoul on Dec. 19, 2018. (Yonhap)

SEOUL, Dec. 19 (Korea Bizwire) — The South Korean government on Wednesday announced the second stage of its plans to supply more homes to stabilize the overheated housing market, involving the building of 155,000 homes in areas near Seoul.

On top of the 35,000 new homes announced in September, 155,000 dwellings will be created at 41 sites in Seoul, Incheon and Gyeonggi Province starting in 2020, according to the Ministry of Land, Infrastructure and Transportation.

“The home supply plan is part of the government’s broad plan to supply 300,000 homes in Seoul and adjacent metropolitan areas. In particular, the government will strengthen public transportation systems to allow access to four large residential complexes (to be built in Incheon and Gyeonggi Province) within 30 minutes from the central district of Seoul,” Land Minister Kim Hyun-mee said in a press briefing.

The four sites designated for large residential complexes with a combined housing capacity of 122,000 are in Gwacheon, Hanam and Namyangju in Gyeonggi Province — cities adjacent to the capital city — and Gyeyang in Incheon, a port city just west of Seoul, the statement said.

No greenbelt areas are included in the plans.

In September, the ministry announced a broad plan to provide 300,000 “low-priced but quality” homes to the underprivileged as home prices had skyrocketed, particularly in Seoul and metropolitan areas, for years through the first half of 2018 amid ample liquidity in the markets.

The government will also try to shorten the commuting time between central Seoul and the locations of the remaining 110,000 homes, Lee Mun-ki, deputy minister for housing and land affairs at the ministry, told reporters.

To help shorten the commuting time between Seoul and the selected sites, the government plans to extend existing subway lines and establish new roads, railway systems and transfer stations, the ministry said.

Experts said transportation networks between Seoul and the four large residential sites should be established first to attract people to the complexes.

“If the construction of the great train express systems that transport residents in suburban areas to Seoul begins within a couple of years, some potential home buyers are expected to move to the residential complexes near Seoul,” said Park Won-gab, senior advisor for real estate at KB Kookmin Bank.

Home prices in Seoul and neighboring areas are expected to continue to fall for the time being, Park said without elaborating.