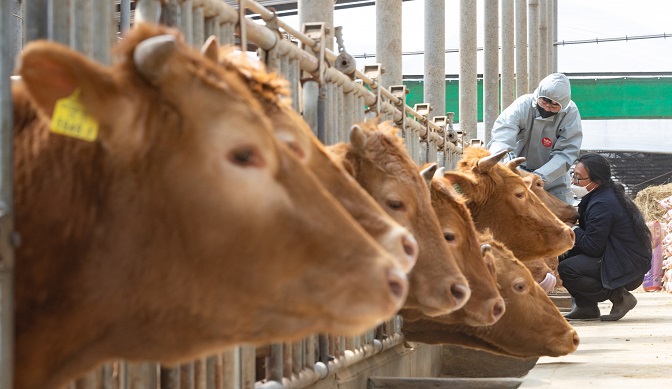 A vet administers foot-and-mouth disease vaccines to cows at a farm in Yongin, 49 kilometers south of Seoul, on April 5, 2022, as the Gyeonggi provincial government has started a vaccination program against the animal disease. (Pool photo) (Yonhap)

SEOUL, April 13 (Korea Bizwire) — The Ministry of Agriculture, Food and Rural Affairs said Tuesday it will carry out a trial project for the improvement of cow breeding methods aimed at reducing greenhouse gases generated during the process of breeding cows.

Over the past 20 years, the length of the cow breeding period was extended, and farmers became more reliant on feed grain, making the breeding process more expensive.

The breeding period for fattening cattle was extended from about 23 months in 2000 to about 30 months in 2020, leading to an increase in the amount of feces and greenhouse gases being produced.

Taking this in mind, the government plans to invest about 10 billion won (US$8.12 million) over the next three years to carry out a feeding experiment program by genetic trait, breeding period and nutritional level for about 600 calves at a farm in Anseong, Gyeonggi Province operated by the National Agricultural Cooperative Federation.

With this program, the ministry aims to develop an optimal breeding model as well as to shorten the cow’s slaughter age from 30 months to 24 months.

If the breeding period is shortened as such, the generation of greenhouse gases per cow can be reduced to about 75 percent of the current level. In addition, the per-cow feed cost can also be reduced by about 1 million won.