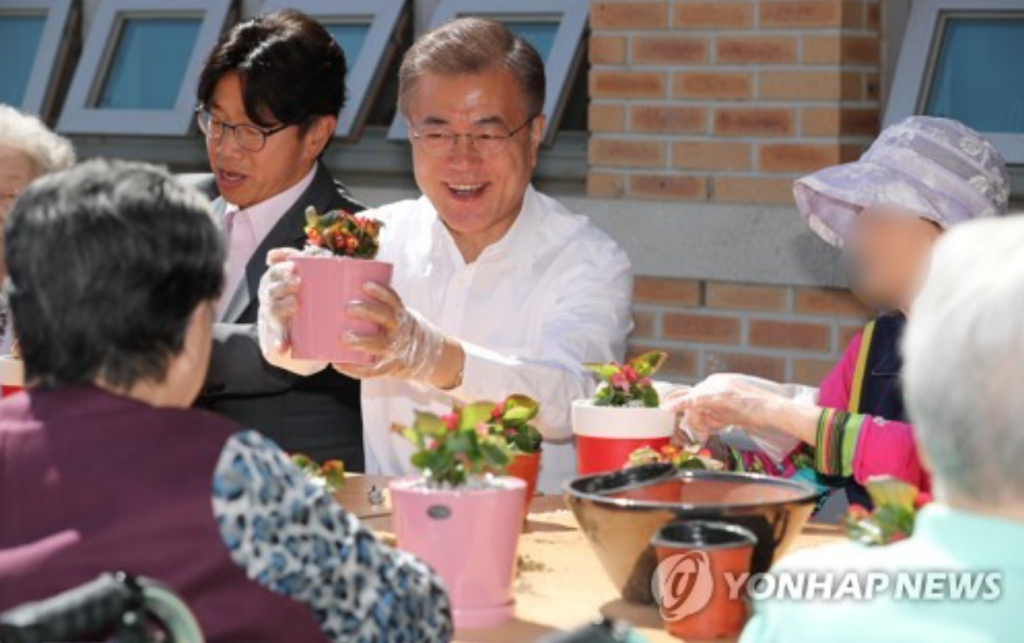 President Moon Jae-in holds up a pot of flowers that he made with senior citizens at a state-operated nursing home in Seoul on June 2, 2017. (image: Yonhap)

SEOUL, June 7 (Korea Bizwire) – The new state program for dementia patients proposed by President Moon Jae-in is expected to affect some hundreds of thousands of patients suffering from memory loss and their families in the country, experts said Wednesday.

During the presidential campaign, Moon had stressed that the government should take more responsibility for the treatment of dementia and proposed launching a state program to handle the issue.

Under the program, the government would increase the number of support centers for affected patients, build hospitals dedicated to treating the disease and establish relevant links across the medical, welfare and nursing sectors.

Among South Koreans aged 65 or older, 725,000 are estimated to be suffering from dementia, according to the Ministry of Health and Welfare. Experts say the number will reach the 1 million mark in 2024, and surge to 2 million in 2041 and 2.7 million in 2050.

The government will inject a 160 billion-won (US$143 million) extra budget to set up 205 new dementia care centers nationwide, the ministry said. There are 47 centers currently under operation, 25 of which are located in Seoul.

Another 60 billion won will be spent to establish clinics specialized in dementia care within public hospitals.

Some 20 million won is estimated to be spent on a dementia patient annually, according to 2015 data. Considering the number of patients, the total cost, estimated at 13.2 trillion won, accounts for some 0.9 percent of the country’s gross domestic product (GDP).

Moon also promised to introduce a 10 percent cap on the financial burden placed on those insured against dementia, a rate similar to those applied to four major age-related diseases — cancer, cardiac disorders, cerebrovascular diseases and other rare incurable diseases.