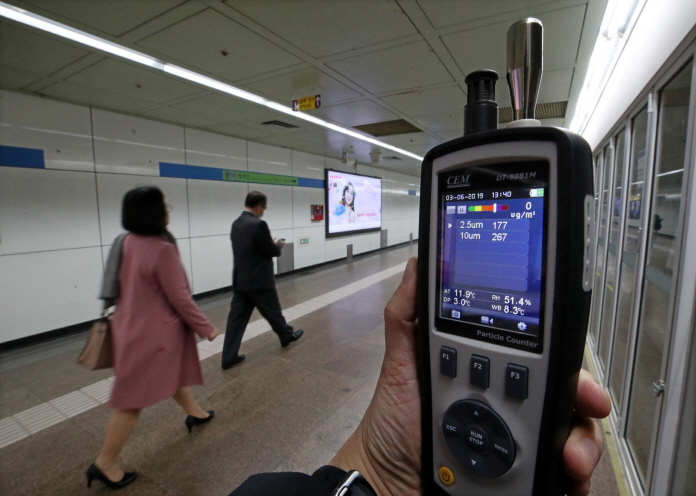 The government will oblige the public transport operators to conduct air quality measurements for their vehicles every year. (Yonhap)

SEOUL, March 11 (Korea Bizwire) — The government will strengthen its air quality monitoring efforts for trains and buses from next month to minimize ultrafine dust particles inside public transportation vehicles, the Ministry of Environment said Wednesday.

Beginning April 1, operators of subways, trains and inter-city buses will be advised to keep the amount of ultrafine particles smaller than 2.5 micrometers in diameter, known as PM 2.5, inside their vehicles below 50 micrograms per cubic meter, the ministry said.

Currently, looser standards are in force, as public transport operators are only asked to maintain the level of PM 10, or fine dust particles smaller than 10 micrometers in diameter, below 150 to 200 micrograms per cubic meter, inside their vehicles.

In addition, the government will oblige the public transport operators to conduct air quality measurements for their vehicles every year from next month, the ministry noted.

Under the current rule, they are only advised to carry out the air quality assessment every two years.

But the government will exclude city and village buses from the new air quality regulations, as they are affected by outdoor air due to frequent door openings.

Ultrafine particles are a class one carcinogen.

The weather authorities here categorize concentrations of PM 2.5 particles between 0 and 15 micrograms per cubic meter as “good,” between 16 and 35 as “normal,” between 36 and 75 as “bad” and more than 76 as “very bad.”

The environment ministry said it aims to lower the nation’s annual average PM 2.5 level from 23 micrograms per cubic meter last year to 20 micrograms this year.