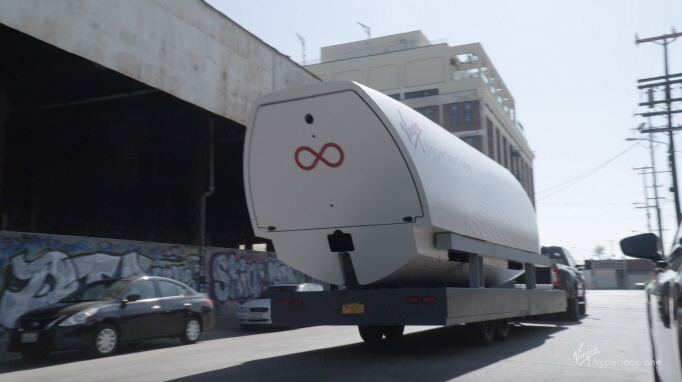 LOS ANGELES, Jul. 30 (Korea Bizwire) — Virgin Hyperloop One (VHO), today launched a first-of-its kind U.S. roadshow to bring its XP-1 hyperloop pod to communities across the United States and start a dialogue about the power of this new form of mass transportation.

“When government and investor delegations come to our test site, seeing the technology makes it real for them. Not everyone can come to the Nevada desert, so we’re bringing our technology to the people – the American people who will be riding this new form of transportation within a decade,” said Jay Walder, CEO of Virgin Hyperloop One.

On May 11, 2017, XP-1 completed the world’s first full-system hyperloop test – what VHO calls its “Kitty Hawk” moment. This was the first time any company had integrated all of the components of a hyperloop including a highly efficient motor, power electronics, magnetic levitation, vacuum pumping systems, and an aerodynamic vehicle as a single unified system. During testing, XP-1 set the full-scale hyperloop speed record of 240 miles per hour on just 550 yards of track.

The national roadshow kicks off as states and cities across the world are competing to be the first to implement hyperloop technology, realizing the significant socio-economic benefits of early adoption. Nine states are exploring the technology and the federal government has created the Non-Traditional and Emerging Transportation Technology (NETT) Council to advance safety and regulatory certification.

The roadshow will give local communities the chance to see first-hand the historic test pod and learn more about their states’ progress in bringing hyperloop to fruition in a matter of years. Below are the scheduled stops along the national roadshow route:

The first stop will be in Columbus, Ohio on Sunday, August 4th. VHO has partnered with The Center of Science and Industry (COSI) and the Mid-Ohio Regional Planning Commission (MORPC) to host a STEM outreach day – featuring the XP-1 vehicle and hyperloop-related, hands-on activities for all ages. The event is free and open to the public from 10:00 AM – 5:00 PM at COSI (333 West Broad St. Columbus, OH 43215).

As part of the Rapid Speed Transportation Initiative, the Mid-Ohio Regional Planning Commission is conducting a feasibility study of hyperloop technology along a Chicago-Columbus-Pittsburgh corridor, followed by components of an environmental impact statement along the same route.

“We’re thrilled to welcome Virgin Hyperloop One CEO Jay Walder and his team to Columbus. Since being named a winner of the Hyperloop One Global Challenge in 2017, we’ve been proud to work with VHO in advancing our ‘Midwest Connect’ corridor,” said William Murdock, executive director of the Mid-Ohio Regional Planning Commission. “Showcasing VHO and the XP-1 pod in Columbus as the first stop on the U.S. roadshow offers the opportunity for our businesses, community leaders, and residents to see the impact this emerging technology could have on the future success of Central Ohio – and the entire Midwest.”

From Columbus, VHO will head to Arlington, Texas, where they’ve partnered with the Dallas Cowboys and the North Central Texas Council of Governments (NCTCOG) to unveil XP-1 at AT&T Stadium, the 4th largest in the NFL. The vehicle will be viewable during the scheduled stadium tours at AT&T Stadium (1 AT&T Way, Arlington, TX 76011). Make sure to get your tickets here.

The Dallas-Fort Worth region has focused its program on students of all ages interested in careers in science, technology, engineering, and mathematics (STEM). The stadium will be open on August 9th from 2:30 to 4:00 PM for an invitation-only event featuring students from area school districts and other campuses for demonstrations of technologies related to the hyperloop project.

The Dallas-Fort Worth Regional Transportation Council announced their intent to evaluate hyperloop technology in Texas. The agency has begun a hyperloop feasibility study of a Fort Worth to Laredo route and an environmental impact study along a Dallas to Fort Worth corridor, which would include an Arlington station with access to Dallas Fort Worth International Airport.

“Our region is going to gain 3 million new residents within 25 years. In order to handle this mass influx of people, we need to explore projects that will modernize our transportation infrastructure,” said Michael Morris, P.E., Director of Transportation for the North Central Texas Council of Governments. “We are exploring hyperloop as a potential project that would connect millions of Texans faster, safer, and more efficiently.”

After a short hiatus, XP-1 will be back on the road. Thanks to the KC Tech Council and Am Law 100 firm Polsinelli, XP-1 will be speeding into the Kansas Speedway during the famed American Royal World Series of Barbecue – the world’s largest barbecue and Kansas City’s biggest party! On September 14th, better known as “Smokin’ Saturday,” XP-1 will be on display alongside other family-friendly programming like live music, BBQ demos, food trucks, a classic car show, and the Cowtown Family Fun Fest. The vehicle will be viewable from starting at 11:00 AM at the Kansas Speedway (400 Speedway Blvd, Kansas City, KS 66111). Tickets can be found here.

Following completion of the first hyperloop feasibility study in the U.S., House Speaker Elijah Haahr announced the formation of the Blue Ribbon Panel headed by Lieutenant Governor Mike Kehoe, which will explore next steps and funding mechanisms for the Missouri Hyperloop project. The panel will report back with recommendations by September 2019.

“On behalf of Greg Kratofil, Jr. of Polsinelli and the KC Tech Council, we are thrilled to welcome the Virgin Hyperloop One XP-1 hyperloop vehicle to our great city of Kansas City,” said Ryan Weber, President of the KC Tech Council. “There has been so much excitement and interest in this technology, and we know the Kansas City tech community and general public will be receptive to the demonstration and learning more details. We encourage the community’s attendance at the American Royal World Series of Barbecue to view this cutting-edge vehicle in person, as we are confident it will play a key role in the future of our transportation.”

Beyond these cities, XP-1 also will be stopping throughout the heartland – at diners, hotels, museums, parks, state houses, and stadiums – to share the progress and promise of hyperloop technology.

This 4,000 mile route across the United States will today take 70 hours driving. With hyperloop, it would take about six.

About Virgin Hyperloop One
Virgin Hyperloop One is the leading hyperloop company launching the first new mode of mass transportation in over 100 years. The company successfully operated a full-scale hyperloop vehicle using electric propulsion and electromagnetic levitation under near-vacuum conditions, realizing a fundamentally new form of transportation that is faster, safer, cheaper, and more sustainable than existing modes. The company is now working with governments, partners, and investors around the world to make hyperloop a reality in years, not decades. They currently have projects underway in Missouri, Texas, Colorado, North Carolina, the Midwest, India, KSA, and the UAE. Learn more about Virgin Hyperloop One’s technology, vision, and ongoing projects here.

A photo accompanying this announcement is available at https://www.globenewswire.com/NewsRoom/AttachmentNg/f65ae916-191c-47a1-9bae-174a5171d944