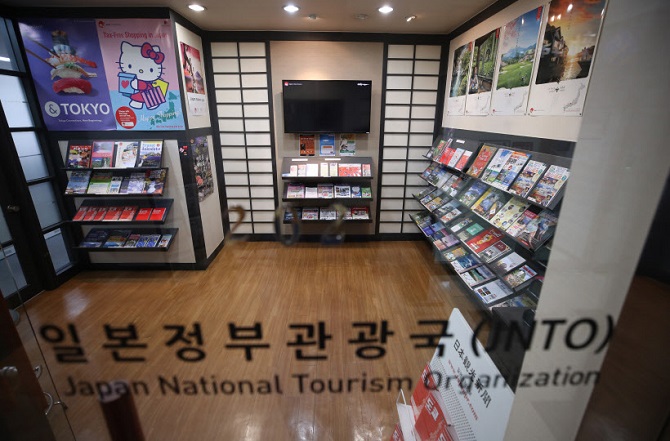 This photo taken on July 4, 2019 shows the office of the Japan National Tourism Organization in Seoul. (Yonhap)

The Japan Press Research Institute conducted a survey of 1,000 people each from South Korea, China, the United States, France, and Thailand to come up with the said results, Kyodo News reported.

Asked if they would like to visit Japan, 51 percent of South Koreans said ‘yes’, up by 16.8 percentage points from last year’s poll.

At 77.8 percent, a strong majority of Thais also wanted to visit Japan, as well as 60.2 percent of French respondents, 51.8 percent of Americans, and 40.3 percent of Chinese.

More Koreans expressed their friendly sentiments towards Japan, up by 8.6 percentage points from last year.

“Korea-Japan relations have found a new hope for improvement following the resignation of Japanese Prime Minister Shinzo Abe,” Jiji Press said as it quoted a statement from a researcher who carried out the survey for South Koreans.

One thought on “Growing Number of S. Koreans Want to Visit Japan: Poll”