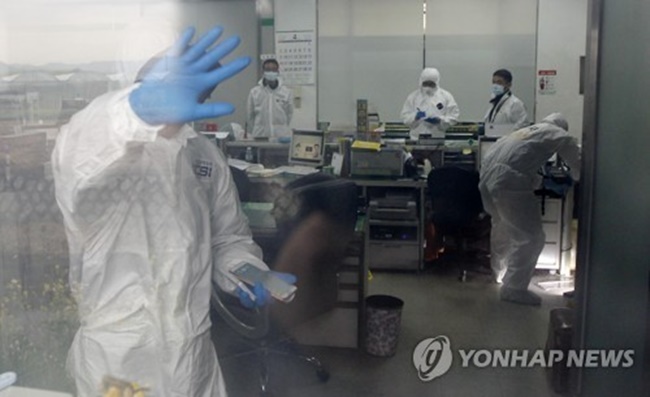 Police conduct an on-site inspection of a bank branch of the National Agricultural Cooperative Federation in the southeastern city of Gyeongsan on April 20, 2017, after an unidentified armed man escaped from the branch with a sack full of tens of millions of won. (Image: Yonhap)

GYEONGSAN, South Korea, April 20 (Korea Bizwire) – Police launched a manhunt for an unidentified armed man after he escaped with a sack full of tens of millions of won from a bank branch of the National Agricultural Cooperative Federation in the southeastern city of Gyeongsan on Thursday, police said.

Around 11:55 a.m., the burglar entered the branch wearing a mask and toting a gun, demanding that tellers at the branch of the cooperative, also known as Nonghyup, put money into a sack he had brought with him.

At the time of the crime, one man and two women were working at the branch and there were no clients.

The suspect jumped over the counter and fired a shot that hit the inner wall of the branch while scuffling with the male employee. No one was hit by the shot fired from what is believed to be a homemade gun, as the suspect was not aiming at anyone, police said.

After pushing the three into the safe and placing money into a sack, he fled the scene on a bicycle.

At 11:56 a.m., after the suspect got away with the crime, the branch gave police a tip through another Nonghyup branch that it was robbed. “The employees were unable to report to us directly because they were in a state of panic,” they said.

According to the employees, the man appeared to be 175 to 180 centimeters tall and wore a gray hat and a cold-proof blue face mask.

Police suspect the robbery suspect fled the scene on a bicycle, as one bicycle was parked in front of the branch. They also believe he is a foreigner, as witnesses said his Korean was poor. They are furthermore investigating where the gun came from and if he had accomplices.