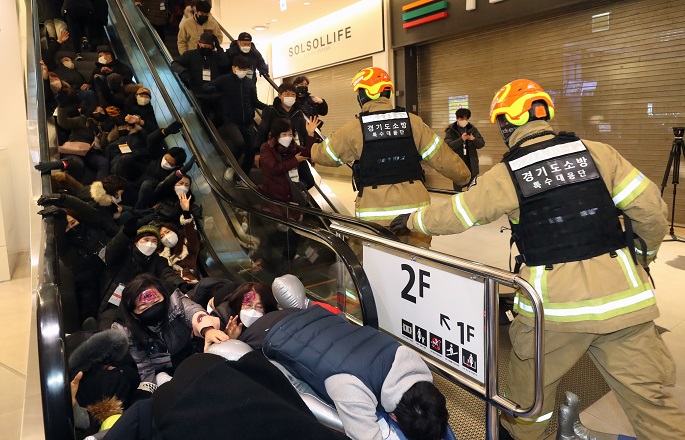 Citizens take part in an safety drill at a branch store of Lotte Department Store in Suwon, south of Seoul, on Dec. 8, 2022. (Yonhap)

The drill took place at a branch store of Lotte Department Store in Suwon, south of Seoul, and was attended by some 500 people from 32 institutions including Gyeonggi Province, the city of Suwon and local police and fire departments.

A total of 85 vehicles and pieces of equipment, including helicopters, were also present.

The drill began with a fictional scenario where a number of people got stuck on an escalator after it malfunctioned.

A rescue team from the fire department arrived at the scene 10 minutes after a distress call, safely evacuating every person inside the department store.

At the lower end of the escalator, dummies were stacked up to imitate a situation in which movement is limited due to collapsed bodies.

The rescue team engaged in various rescue missions like conducting cardiopulmonary resuscitation (CPR) or evacuations based on the color of the band worn by each victim.

Twenty minutes after the first accident, a wall collapsed over citizens, along with traffic accidents between a bus and a passenger car in accordance with the fictional scenario.

The Central Disaster and Safety Countermeasures Headquarters announced that 20 people died and 100 people were injured under the fictional scenario.