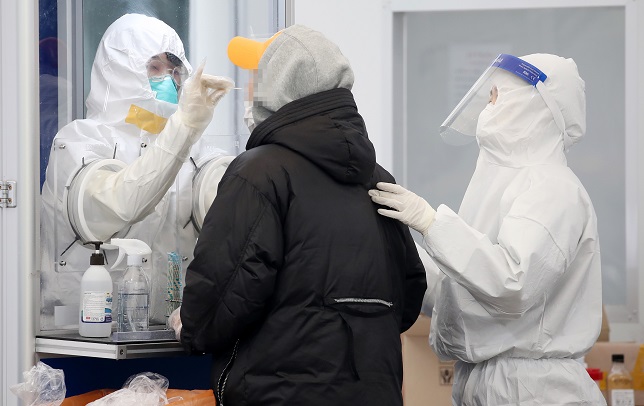 Health workers clad in protective gear carry out a COVID-19 test on a citizen at a makeshift virus testing clinic in Seoul on Nov. 26, 2020. (Yonhap)

Seoul, the surrounding Gyeonggi Province and the western port city of Incheon will be under the current Level 2 of the country’s five-tier social distancing system for a week, according to the authorities.

However, antivirus curbs in all other areas will be elevated to Level 1.5 social distancing for two weeks from Tuesday, they said.

Busan, South Chungcheong and three other provinces and areas where high numbers of virus cases have been reported recently will also be put under tougher Level 2 social distancing, they said.

Under the tougher distancing measures, saunas and steam-bath rooms in bathhouses will be banned from Tuesday for a week in the greater Seoul area.

Nine kinds of indoor exercises practiced in groups, including Zumba dance, aerobics and kickboxing, will also be banned from Tuesday for a week.

To slow the spread of the virus among young people, the government will prohibit hotels, party rooms and other guesthouses from hosting year-end or New Year’s parties that are known be prone to virus transmission.

The measures come less than a week after the capital area began enforcing Level 2 measures last Tuesday, with some medical experts warning that the country could see the daily virus count soar to 1,000 if more stringent measures are not taken.

On Monday, the country added 438 more COVID-19 cases, marking the second day in a row that they stayed in the 400 range.

However, medical experts attributed the apparent slowdown to less testing over the weekend, citing concerns over another wave of the pandemic.