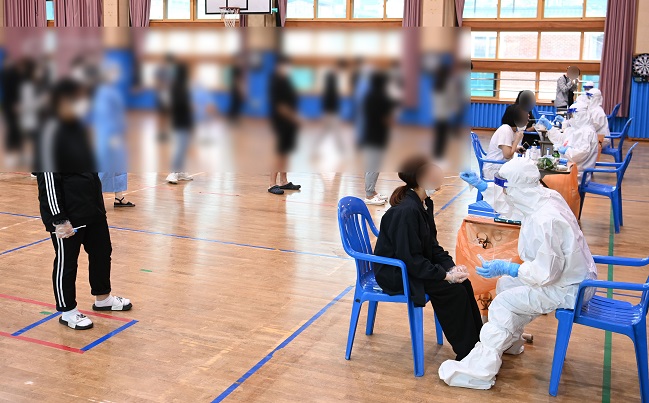 This Sept. 7, 2021, file photo shows students at a middle school in Gwangju, about 330 kilometers south of Seoul, taking a mass COVID-19 test after 13 infection cases broke out at the school. (Yonhap)

SEOUL, Sept. 27 (Korea Bizwire) — Nearly half of South Koreans are in favor of a cautious approach to the issue of COVID-19 vaccinations for teenagers aged between 12 and 17, a poll showed Monday.

In the poll of 1,006 people aged 18 and above conducted by the Korea Society Opinion Institute on Friday and Saturday, 49.1 percent said the government should take some time to observe vaccination situations in other countries before administering COVID-19 vaccine shots to the teen group.

In contrast, 42.6 percent said vaccinations for teens should be carried out preemptively to restore pre-pandemic life, such as full in-person attendance at schools.

The remaining 8.3 percent said they were not sure.

Earlier in the day, the Korea Disease Control and Prevention Agency (KDCA) announced the government will begin inoculating adolescents aged between 12 and 17 and pregnant women Oct. 18.

Aiming to achieve herd immunity by November, South Korea kicked off its vaccine rollout in February, starting with some virus-vulnerable groups, such as front-line medical workers and the elderly.

Those aged under 18, however, were previously excluded from the inoculation plan largely due to a lack of safety reviews of different vaccines on the young.

The KDCA said the government has decided to include adolescents in the plan as the number of younger COVID-19 patients has increased amid the fourth wave of the pandemic.

The poll, commissioned by local cable news channel TBS, has a margin of error of plus or minus 3.1 percentage points and a 95 percent confidence level.