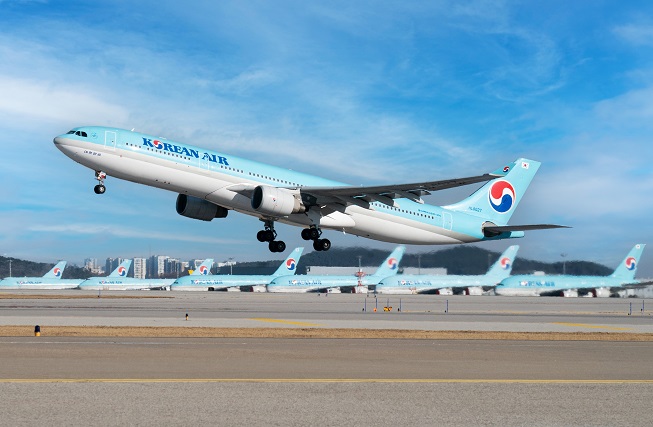 This file photo provided by Korean Air shows an A330 passenger jet taking off from the Incheon International Airport in Incheon, just west of Seoul.

SEOUL, June 13 (Korea Bizwire) — Hanjin KAL Corp., the holding company of South Korea’s air transportation conglomerate Hanjin Group, said Monday it is selling its entire stake in its budget carrier unit to its flagship Korean Air Lines Co., a move seen as intended at streamlining the structure before completing a merger with a smaller domestic rival.

Hanjin KAL said the decision, approved at a board meeting earlier in the day, will involve the sale of its 54.91 percent stake in Jin Air Co., or about 28.6 million shares, to Korean Air, for roughly 604.8 billion won (US$470 million).

The sale, which will be completed by Wednesday, will return Jin Air to Korean Air as its subsidiary about nine years after the low-cost carrier was reorganized under Hanjin KAL’s wing amid Hanjin’s restructuring efforts for a turnaround from financial troubles.

Jin Air was established by Korean Air as a wholly-owned subsidiary in 2008.

Hanjin’s latest move appears intended at reorganizing the governance structure so as to resolve regulatory problems as it is undergoing the process to merge its Korean Air with Asiana Airlines Inc.

Hanjin is pushing to launch an integrated lineup of low-cost carriers once the mega merger is completed, by combining Jin Air with Asiana’s two budget carriers — Air Busan and Air Seoul.