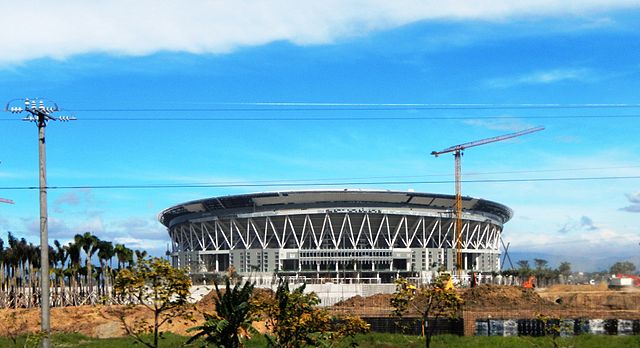 The indoor arena which was completed on May 30 was built on the total area of 74,000 square meters with 51,000 seats and its roof area is scaled to 35,000 square meters, largest in the world. (image: Ramon FVelasquez/ Wikimedia Commons)

SEOUL, June 10 (Korea Bizwire) – Hanwha Engineering & Construction announced on June 9 that it has completed the construction of the world’s largest domed performance hall, the Philippine Arena, near Manila recently.

The indoor arena which was completed on May 30 was built on the total area of 74,000 square meters with 51,000 seats and its roof area is scaled to 35,000 square meters, largest in the world — about three times as big as South Korea’s Olympic Gymnastics Arena, also known as Olympic Gymnastics Hall, the nation’s representative indoor sports arena, located within the Olympic Park, in Seoul.

Lee Keun-po, president and CEO of Hanwha E&C, said, “By completion of the largest indoor area in the world, we became highly recognized with our building ability and technical skills in the overseas construction market. We expect more contracts on civil engineering and construction projects in the Southeast Asian region.”

It took 30 months for the full completion of the indoor area worth US$175 million. The Filipino Christian Church foundation Iglesia ni Cristo will own the arena in Bulacan, 27 kilometers north of Manila. The maximum capacity of the arena is 55,000 people.

Meanwhile, as the recession in the domestic construction market prolongs, Hanwha E&C tries to expand overseas construction markets like chemical and power plants and new town developments. Besides, by gaining orders including civil engineering and construction and plants, it plans to build a stable business portfolio in the future.

Especially, Hanwha plans to transform itself into a global construction company by focusing on the successful completion of the Bismayah New City project in Iraq worth $8 billion for which it won the bid in 2012.

This year, Hanwha E&C plans to win 4.2 trillion won worth of contracts, among which 65 percent are from overseas markets. Earlier this year, Hanwha had announced its new vision “Design the World” containing its resolution to be a global construction company.

What is a dome?

A dome is an element of architecture that resembles the hollow upper half of a sphere. Dome structures made of various materials have a long architectural lineage extending into prehistory.

Corbel domes and true domes have been found in the ancient Middle East in modest buildings and tombs. The construction of the first technically advanced true domes began in the Roman Architectural Revolution, when they were frequently used by the Romans to shape large interior spaces of temples and public buildings, such as the Pantheon.

Many domes, particularly those from the Renaissance and Baroque periods of architecture, are crowned by a lantern or cupola, a Medieval innovation which not only serves to admit light and vent air, but gives an extra dimension to the decorated interior of the dome. (source: Wikipedia)

Corrections: Information regarding the owner of the world’s largest “indoor arena” located in the Philippines is the Filipino Christian Church foundation Iglesia ni Cristo. We wrote the religious body as a Protestant Church foundation in the previous posting. The correction has been made with a helping tip from one of our readers. Great thanks.