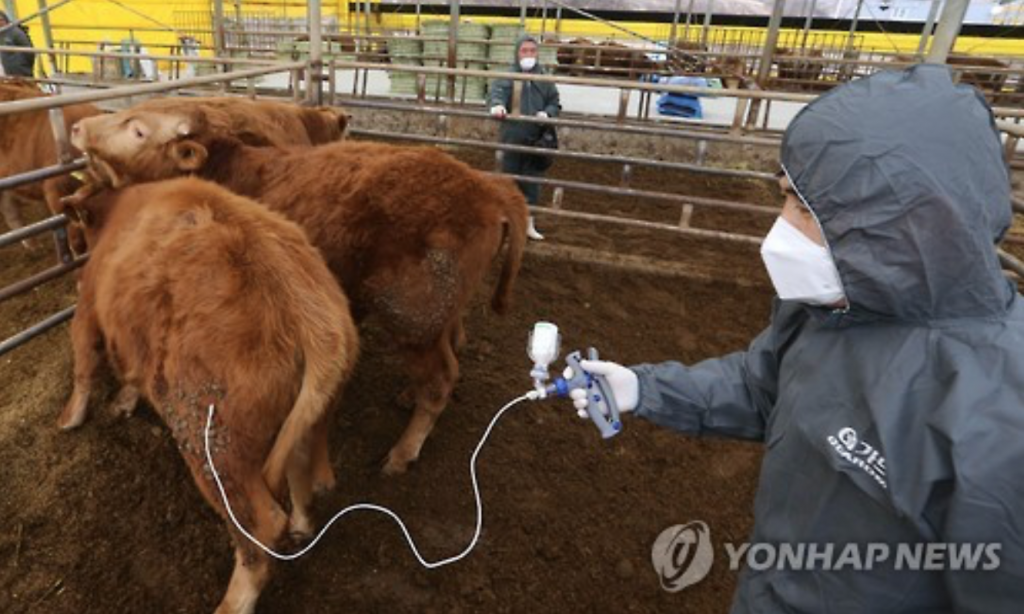 Cows are vaccinated against foot-and-mouth disease at a farm in Goesan County on February 8. (image: Yonhap)

SEOUL, Feb. 20 (Korea Bizwire) – Following criticism of recurrent foot-and-mouth disease outbreaks in South Korea, the Ministry of Agriculture, Food and Rural Affairs announced Sunday that it will introduce a pilot project for a mutual aid system that will function much like a health insurance policy for cattle.

The “premiums” will be split fifty-fifty between the government and farm owners, and under the agreement veterinarians will be assigned to visit farms once or twice a month for periodic checkups of the animals. The cattle will also benefit from free treatment to a certain extent, officials said.

The gist of the new program is to prevent livestock diseases instead of relying on treatment following the outbreak of a disease. The government expects that making farm owners partially responsible for the fees will encourage stronger voluntary quarantine measures, which should in turn contribute to the development of localized quarantine networks to bolster the government’s quarantine system.

At the moment, the majority of Korean farms diagnose their cattle on their own, with elderly farmers often neglecting vaccinations for animal diseases, including foot-and-mouth disease. The latest outbreak has already resulted in the culling of some 1,400 South Korean cattle as of Sunday.

This health monitoring system, however, is not the first of its kind to be introduced.

Japan, for instance, adopted a similar system in 1947. With over 90 percent of the farms currently signed up for the program, the country has not experienced a foot-and-mouth disease outbreak since 2010.

In contrast, the disease is almost an annual event for South Korea. The worst outbreaks were suffered in 2010 and 2011, resulting in the slaughter of 3.48 million cattle, and 3 trillion won ($2.62 billion) paid out in compensation for the culling alone.

“South Korea, which has expanded its livestock trade with other Asian countries, is always vulnerable to overseas epidemics,” said Kangwon National University officials, who researched the livestock industry on behalf of the ministry. “In order to better quarantine highly infectious diseases, periodic preliminary monitoring and accurate early diagnosis by veterinarians are essential.”

The ministry said its pilot project will cover cattle farms in two of the cities or counties volunteering for the program, in coordination with local agriculture and veterinarians’ associations.

“It is virtually impossible for government officials to regularly monitor each and every farm. But once the program succeeds, it will help establish a solid foundation for a civilian quarantine system,” a ministry official said. “In the long term, farms will reduce the risks of infection, boosting productivity, while the country will save on financial losses resulting from livestock diseases.”