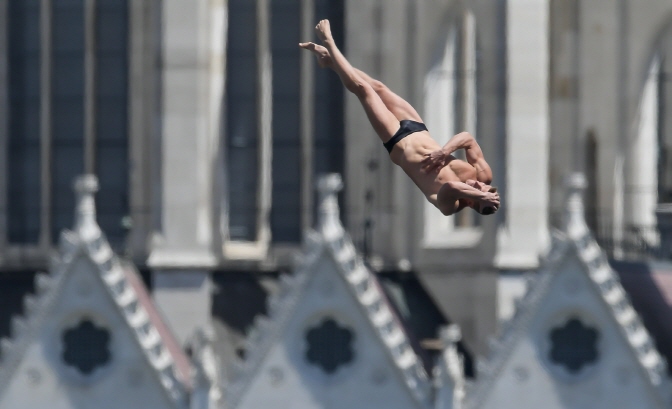 GWANGJU, Jun. 18 (Korea Bizwire) — High diving is expected to be one of the most popular events during the 2019 FINA World Championships scheduled to take place in two southwestern South Korean cities — Gwangju and Yeosu — in July, its organizer said Tuesday.

The biennial FINA World Championships will be held in Gwangju, 330 kilometers south of Seoul, and Yeosu, South Jeolla Province, from July 12-28. FINA is the French abbreviation of the International Swimming Federation.

With its opening 25 days away, the organizing committee of the FINA championships said it has so far sold 171,000 tickets, marking a ticket sales rate of 46.4 percent.

Among the championships events, high diving showed the highest ticket sales rate of 96 percent, with 6,200 of 6,500 tickets sold, the committee said.

The high diving event will feature a 27-meter-high diving platform and a temporary water tank installed at a Chosun University soccer field.

Audiences will be able to watch a dynamic diving competition against the backdrop of the Gwangju cityscape and Mount Mudeung, as men and women jump from heights of 27 meters and 20 m, respectively, into a water tank 15 meters in diameter and six meters in depth.

The committee said the open water swimming competition, dubbed swimming’s marathon, came second with a ticket sales rate of 44 percent, or 3,300 tickets sold out of 7,600.

Artistic swimming came next with a ticket sales rate of 32 percent, followed by competitive swimming (31 percent) and water polo (20 percent), it noted.