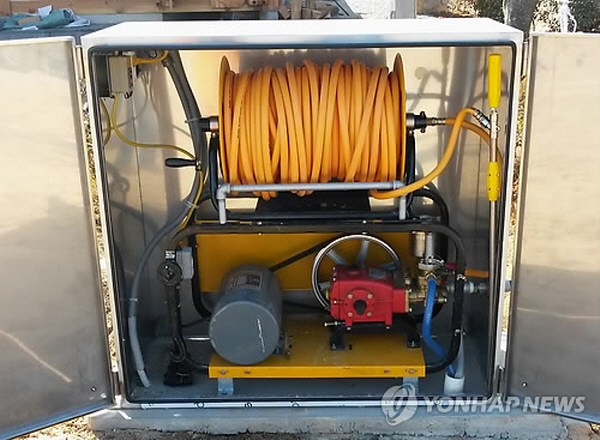 With a built-in 100-meter long hose, the hydrant is easy to operate. (image: Yonhap)

Yeongam, Apr. 17 (Korea Bizwire) – A fire station in Yeongam has developed an emergency fire hydrant which is as effective as a pump truck, in order to allow citizens in remote areas of Yeongam to take faster action in fighting fires before fire trucks arrive at the scene.

Yeongam Fire Station said on April 16 that it has filed a patent for its fire hydrant, which is made with a crop duster engine. Although the fire hydrant’s engine pump pressure is 4㎏/㎠, which is lower than the 6㎏/㎠ commonly found on fire trucks, it is expected that the hydrant will be powerful enough to suppress fire in its early stages.

With a built-in 100-meter long hose, the hydrant is also easy to operate.

Moon Tae-hyu, chief of Yeongam Fire Station, said that the station is targeting a five minute response time, and is fortifying measures to effectively extinguish fires within those five minutes. Yeongam currently meets its five minute target 51 percent of the time, which is lower than the national average of 57 percent.

The station has currently installed the fire hydrants in four towns, and will continue to install such hydrants in towns situated 5 kilometers away from the fire station.