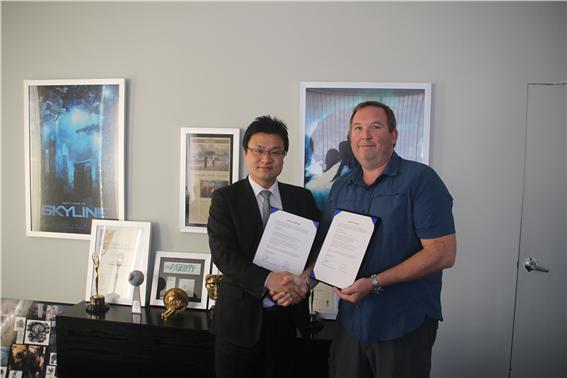 The deal is expected to raise Korea’s competitiveness in the film business as it will establish a bridgehead for Korea to be a mecca for Hollywood film producing.(image: Valuestone)

SEOUL, Jan. 29 (Korea Bizwire) — Hollywood’s visual effects house Hydraulx will advance into Korea’s film making industry by setting up its branch office in Korea. Its advancement into Korea will be implemented in the form of an equity swap with its Korean counterpart Valuestone. To this end, the two signed a letter of intent (LoI) on January 23.

Hydraulx is famous for its brilliant visual effects in Hollywood movies such as Avatar, Titanic, Avengers, X-men, Iron Man 2 and so on. The LoI is the first such case for Hollywood producers to advance into Asia. The deal is expected to raise Korea’s competitiveness in the film business as it will establish a bridgehead for Korea to be a mecca for Hollywood film producing.

Jeong Jin-sang, CEO of Valuestone, said, “To set up Hydraulx’s branch office in China, large Chinese companies communicated with the company for several years. However, we persuaded the company to set up its branch in Korea by focusing on the strength of Korea’s cultural content and other measures for mutual growth.”

“With Hydraulx’s branch and studio in Korea, local companies will inherit its skill in making blockbusters and strengthen its competitiveness. We will offer every possible support to make it a success story in Korea,” he added.