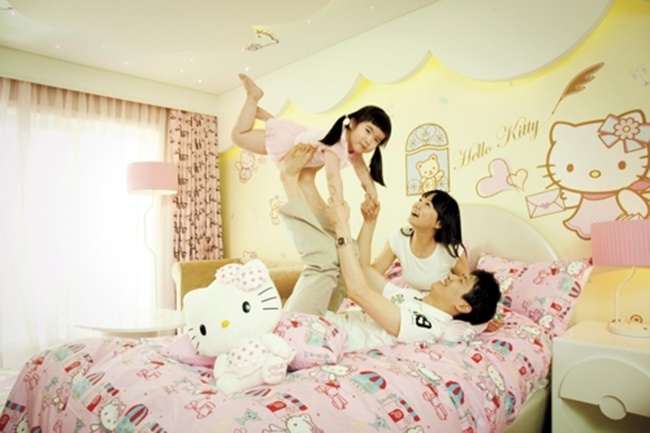 According to Lotte Hotel, the 20 Hello Kitty-themed rooms at Lotte Hotel Jeju are a hit. (Image: Lotte Hotel)

SEOUL, Apr. 10 (Korea Bizwire) — An increasing number of hotels in South Korea are catering towards children, as families make for lucrative guests.

According to Lotte Hotel, the 20 Hello Kitty-themed rooms at Lotte Hotel Jeju are a hit.

Packed with everything Hello Kitty, including a sofa, slippers, and a mirror, the number of the Hello Kitty-themed family twin rooms increased from 11 to 20.

Lotte Hotel World opted for the group’s own characters Lotty and Lorry, with 30 rooms located on the 7th and 8th floor designed after the two characters to attract families with children.

Lotte City Hotel Mapo and Gimpo Airport have teamed up with Larva in a rare move for business hotels.

“Larva-themed rooms are reserved more than 80 percent of the time. They have been received well,” the official said.

InterContinental Seoul COEX is going one step further, with plans for a lounge strictly for children next month in addition to a ‘kids section’ at its buffet restaurant serving dishes that are popular among children.

“To become a family-friendly hotel, we are launching the kids lounge, with the hopes of attracting family guests with children,” an official at the InterContinental Seoul COEX said.