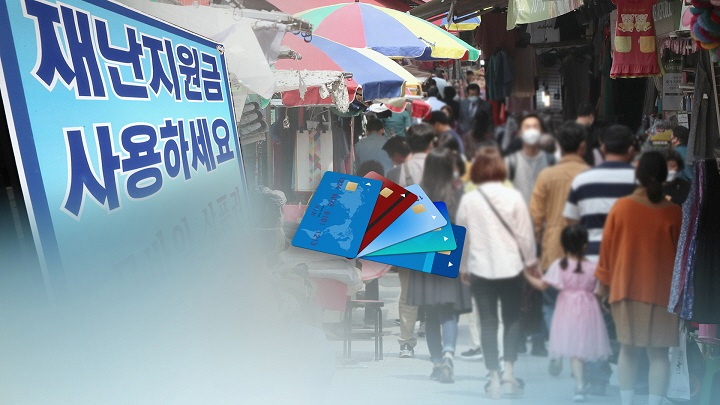 This image, provided by Yonhap News TV, shows the use of pandemic emergency cash handouts doled out to all households in May 2020.

SEOUL, Aug. 19 (Korea Bizwire) — South Korean household income declined in the second quarter from a year earlier due to last year’s high base after the government doled out massive pandemic relief funds to all households the previous year, data showed Thursday.

The average household earned 4.29 million won (US$3,600) per month in the April-June period, down 0.7 percent from the previous year, according to the data from Statistics Korea.

It marked the first on-year fall since the second quarter of 2017, when household income dipped 0.5 percent.

The decline came as the government provided 14.3 trillion won in emergency cash handouts to all households in May last year to help them cope with the fallout of the COVID-19 pandemic.

Due to last year’s high base, the monthly average transfer income backed by the government support nosedived 37.1 percent on-year to 421,000 won in the second quarter, the data showed.

Last quarter, household income earned through wages and business operations increased as the job market improved amid the economic recovery.

Wage income rose 6.5 percent on-year to an average of 2.74 million won per month, marking the fastest on-year gain since the third quarter of 2012.

The monthly average income from business operations gained 3.6 percent to 806,000 won, the sharpest growth since the first quarter of 2018.

The average household spent 3.3 million won per month, up 4 percent from a year earlier as consumer sentiment improved amid the vaccine rollout and eased distancing rules, according to the statistics agency

Monthly household consumption expenditure amounted to 2.48 million won, up 3.8 percent from a year earlier, led by gains in spending on foodstuffs, housing and healthcare services. 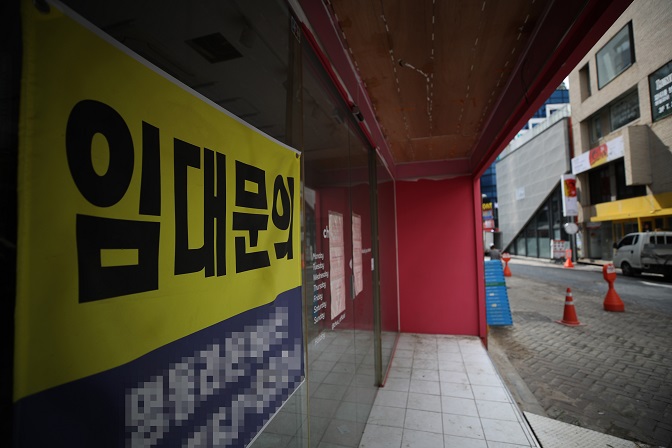 This photo, taken Aug. 17, 2021, shows a store with a lease sign in the shopping district of Myeongdong in central Seoul. (Yonhap)

Meanwhile, the income gap between the haves and have-nots widened in the second quarter as people in the bottom 20 percent income bracket were hit hard by a fall in transfer income, the data showed.

The average monthly income of the bottom 20 percent income bracket fell 6.3 percent on-year to 966,000 won. In comparison, households in the upper 20 percent income range earned 9.24 million won, up 1.4 percent from a year earlier.

The country’s distribution ratio for disposable income, a key barometer of earnings equality, reached 5.59 in the second quarter, up from 5.03 a year earlier. A higher ratio means increased inequality in income distribution.

It means that the top 20 percent income bracket had 5.59 times more earnings than those in the bottom 20 percent over the cite period.

The COVID-19 pandemic has deepened income disparity in South Korea as the pace of economic recovery is uneven, known as a “K-shaped recovery.”