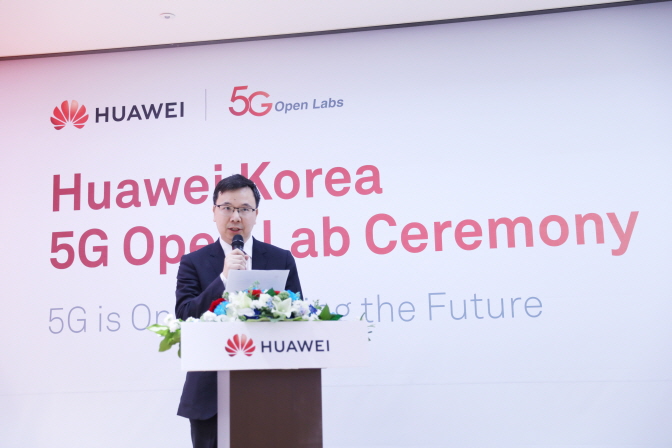 SEOUL, May 30 (Korea Bizwire) — Huawei Technologies Co. opened its first 5G lab in South Korea on Thursday to expand its presence in the South Korean market, but the ceremony was held in a low-key mode amid a tussle with the United States over its telecom equipment.

The Chinese telecom equipment and handset giant said it will invest US$5 million in the 5G Open Lab to develop technologies related to cloud, virtual reality and augmented reality, connected cars, robots and smart factories, to expand the application of its 5G network in various areas.

The 5G test bed, Huawei’s first, will be open to Korean companies and other business partners to test their technologies and equipment in the 5G network to facilitate collaboration, Huawei said.

“We are pleased to work with industry partners to develop the 5G ecosystem,” Yang Chaobin, president of Huawei’s 5G Product Line, said in a release.

The opening ceremony was held in a low-profile manner without the attendance of media, senior officials of the nation’s three carriers and the government, only having officials from small and midsized companies and experts in the field.

The Chinese firm has expressed hope to expand its presence here in the wake of South Korea’s commercial rollout of 5G networks in early April, but its push has faced setbacks amid trade tension between Washington and Beijing.

Earlier this month, the U.S. government banned Huawei’s equipment in its market, citing security concerns, and has been pressuring other countries to boycott its products.

South Korea is in an awkward situation between the U.S., a key military ally, and China, its top trading partner, taking a cautious stance over the trade tension between the world’s two largest economies.

LG Uplus Corp., South Korea’s No. 3 carrier, is the only company that is using Huawei’s equipment in building its 5G base stations. Its bigger rivals, SK Telecom Co. and KT Corp., have signed deals with other vendors, including Samsung Electronics, Ericsson and Nokia, for their 5G supplies.