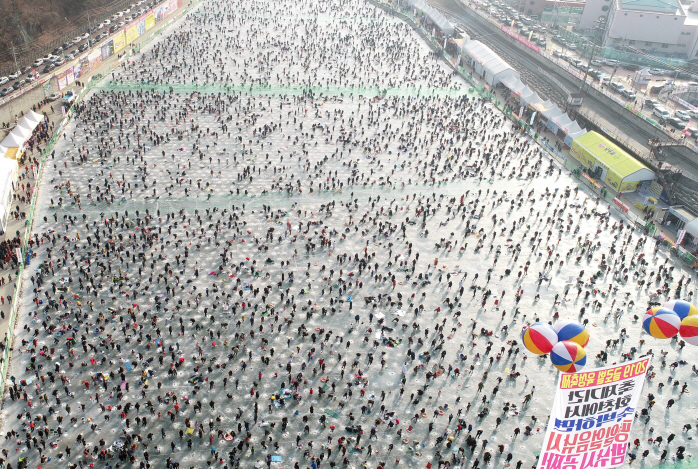 An aerial view of the 2019 Hwacheon Sancheoneo Ice Festival. (Yonhap)

HWACHEON, Jan. 15 (Korea Bizwire) — The ongoing 2019 Hwacheon Sancheoneo Ice Festival has lured more than 1 million visitors for the 13th consecutive year, cementing its status as the most iconic winter festival in South Korea.

The annual ice fishing festival kicked off Jan. 5 on a frozen river in the remote mountainous county of Hwacheon, about 120 kilometers northeast of Seoul, for a run till Jan. 27.

According to organizers Tuesday, slightly over 1.02 million tourists flocked to the festival during the first nine days of its opening.

As many as 230,000 tourists came to the festival Sunday alone, marking the largest single-day visitor tally in its 16-year history.

The festival has also drawn great attention from foreign tourists as it has become famous globally through traditional and social media. The county office estimated the number of foreign visitors at 81,000 during the nine-day period.

The festival’s signature event is to drop a fishing line through some 20,000 holes in the ice and catch “sancheoneo” — a species of trout known to live only in very clean fresh water. It can be enjoyed day and night.

The festival also features various outdoor activities, including barehanded fishing, a sled contest and a spot to meet Santa Claus. It also boasts an ice sculpture square near the festival site and a street with 27,000 lanterns in the rural county. 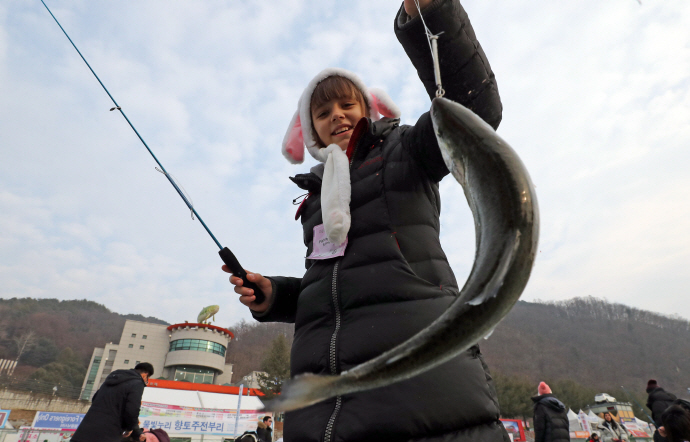 County officials said a cold wave at the start of the year and the county’s aggressive marketing activity have helped make the festival more successful this year.

Due to the cold wave, the river’s ice is more than 30 centimeters thick, which makes it ideal for ice fishing.

In the runup to the festival, county officials carried out intensive marketing activities at home and abroad in a bid to attract more tourists.

The festival has also galvanized the economy of the county with a population of 27,000 and the country’s trout farming industry.

It has created some 2,500 jobs for college students and residents. About 180 tons of trout grown at nationwide farms will be released in the river during the festival.

According to a report, the festival’s direct impact on the regional economy is estimated to reach 100 billion won (US$89 million).

Launched in 2003, the event was chosen as the nation’s best festival by the culture ministry in 2010 and has developed into one of the world’s four major winter festivals.