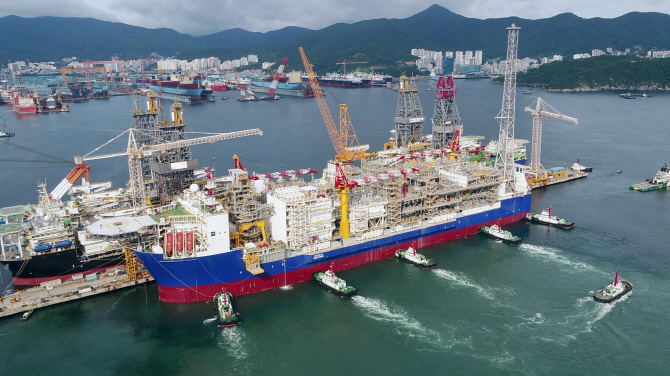 On Wednesday, Hyundai Heavy expressed its intent to buy a majority stake in Daewoo Shipbuilding.

KDB is Daewoo Shipbuilding’s main creditor, with ownership of a 55.7 percent stake.

“We proceeded with the M&A process first, and signed the MOU today,” KDB Chairman Lee Dong-gull told reporters. “We will contact Samsung Heavy, another potential buyer, to see if it is interested in Daewoo Shipbuilding as well.”

The chairman said it will pick a final bidder later after assessing a proposal from Samsung Heavy, if one is forthcoming.

Should the deal proceed as planned, Hyundai Heavy Industries Holdings Co., the parent of Hyundai Heavy, will hold a 26 percent stake in the new entity, with KDB owning 18 percent.

Lee expects the deal to be completed in five to six months.

Stocks of Hyundai Heavy closed at 138,500 won on the Seoul bourse, down 4.15 percent from the previous day’s close, while Daewoo Shipbuilding advanced 2.49 percent to end at 37,000 won.

If the takeover goes ahead, the South Korean shipbuilding industry is expected to be dominated by two major shipbuilders — Hyundai Heavy and Samsung Heavy Industries Co.

The deal estimated at over 2 trillion won would mark the shipbuilding industry’s largest acquisition to date.

But Korean shipyards ranked first in terms of annual new orders for the first time in seven years in 2018. The shipbuilding sector is expected to post a full-fledged recovery this year.

The government has been hoping that the local shipbuilding industry can be overhauled in a way that two major players could dominate the sector to better compete against Chinese rivals and tackle sectoral ups and downs. 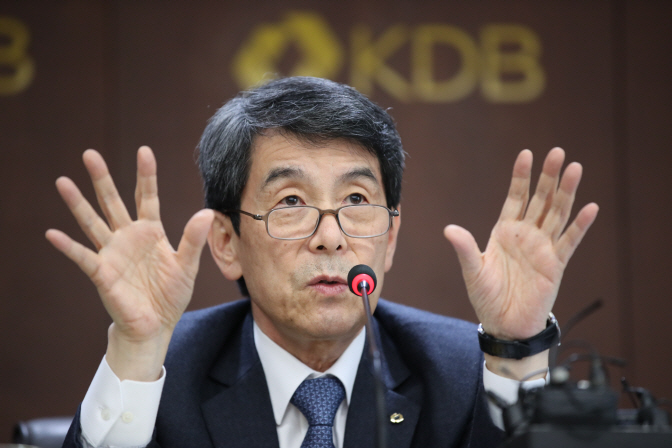 Hyundai Heavy is believed to have enough money to take over Daewoo Shipbuilding. Its cash and cashable assets stood at 2.7 trillion won at the end of September.

On Monday, Hyundai Heavy Industries Holdings said it has signed a deal with Saudi Aramco to sell its 19.9 percent stake in Hyundai Oilbank Co. for up to 1.8 trillion won.

The stake sale also came as Daewoo Shipbuilding is seeing a sharp improvement in its bottom line as a result of massive restructuring efforts and a recovery in the sector.

Meanwhile, the combination of the two shipbuilders would create an unrivaled player in the sector. As of last year, Hyundai Heavy had an order backlog totaling 11.14 million compensated gross tons (CGTs), the largest among others in the sector. The comparable figure for Daewoo Shipbuilding was 5.84 million CGTs.

Their order backlog swelled on the back of massive orders for LNG carriers.

Last year, local shipyards, led by Hyundai Heavy, bagged orders to build a total of 60 LNG ships, almost sweeping all such deals placed around the world and making up for the dearth of demand for high-priced offshore facilities.

Demand for LNG carriers has been on a steady increase in line with a rise in LNG demand, backed by eco-friendly policies in China and the proactive push for energy exports by the United States.

For 2019, demand for LNG ships is expected to remain firm, with local shipyards set to win more deals to build such ships.

Expecting another boom year for LNG ships this year, local shipyards jacked up the order target by more than 10 percent.

Hyundai Heavy will strive to win orders valued at $11.7 billion, up 15 percent from last year.

Daewoo Shipbuilding said it will try to secure $8 billion in deals, up 10 percent over the cited period. Samsung Heavy Industries is seeking to post a 24 percent spike in this year’s orders to $7.8 billion.