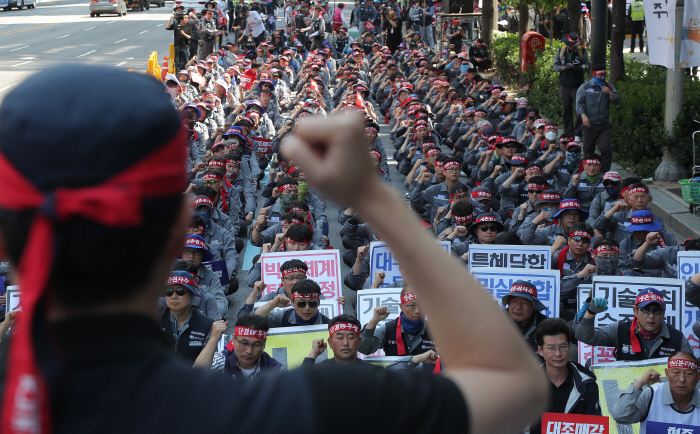 SEOUL, May 26 (Korea Bizwire) — Tensions are mounting ahead of Hyundai Heavy Industries Co.’s planned shareholders meeting next week as unionized workers remain staunch in their opposition to the company’s split-up plan for a merger with a small local shipbuilder, industry sources said Sunday.

Hyundai Heavy shareholders are set to approve splitting of the shipbuilder into two entities at their meeting in Ulsan on Friday, the first step in the process of its proposed merger with Daewoo Shipbuilding & Marine Engineering Co.

In March, Hyundai Heavy Industries signed a deal worth an estimated 2 trillion won (US$1.6 billion) with the state-run Korea Development Bank (KDB) to buy Daewoo Shipbuilding. The bank is the largest shareholder of Daewoo Shipbuilding, with a controlling 55.7-percent stake in the company.

Under the deal, the shipbuilder will be divided into a sub-holding company and reorganized Hyundai Heavy Industries that will carry out its shipbuilding and offshore businesses.

The union has been strongly opposing the idea, claiming that the split forces newly born Hyundai Heavy to inherit massive debts, which will lead to job cuts. Hyundai Heavy’s unionized workers have been launching strikes since May 16. It will continue to strike through Friday.

Industry insiders said the union may step up its pressure on the company, which could lead to violent action involving the police.

The atmosphere surrounding the union heated up on Thursday when it launched a full-scale strike with members of the umbrella labor group Korean Metal Workers Union and Daewoo Shipbuilding.

During their rally in Seoul, 12 unionists were arrested after clashing with the police while attempting to enter the company’s office building in Seoul.

The shipbuilder’s unionized workers plan to stage a 7-hour strike on Monday and launch a full strike starting from Tuesday till the shareholder meeting slated for Friday.

The management said it will take legal action over the union’s recent strikes, while the police said it will not condone any violence against authorities.

To prevent the union from interrupting the upcoming shareholders’ meeting, the company earlier this week filed an injunction with a local court. The court ruling for the injunction is expected to come out early this week.