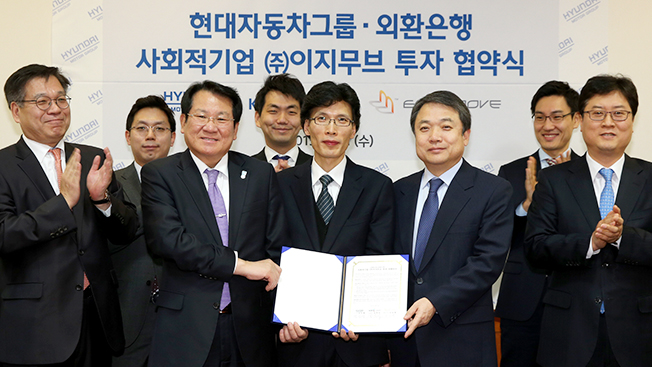 On February 11, the world’s fifth largest automobile maker and the exchange bank signed a business agreement to jointly invest in social enterprise EasyMove, a manufacturer and marketer of physical aids and rehabilitation equipment for the elderly.

The motor group has invested approximately 2.9 billion won (US$2.6 million) in EasyMove since 2010, and it invested an additional 1 billion won for the development of welfare vehicles. According to the agreement, KEB will invest 1.5 billion won in the company.

With the cash injection, EasyMove will be able to set up manufacturing facilities for welfare vehicles for disabled people. The profits from the business will be reinvested in other social enterprises in the same field.

Chung Jin-haeng, president of the group, said, “This business agreement is meaningful in that a large enterprise and a leading bank in Korea are forming a business model to develop social enterprises. We will keep supporting EasyMove to help it enhance mobility for disabled people and achieve sustainable growth.”

Kim Han-jo, CEO of KEB, said, “With the seeds we invested in EasyMove, I hope more social enterprises take deep roots in our society.”

Hyundai Motor Group established EasyMove in 2010, and since its foundation, the company has produced boarding/disembarking aids, posture aids, movement/walking aids and computer aids. It recorded 1.5 billion won in sales in the first year, and was listed as a social enterprise in 2011.

In 2014, EasyMove rolled out the All New Carnival EasyMove, a remodeled welfare vehicle for the disabled, and succeeded in localizing drive-aid equipment for impaired individuals, ringing up 2.8 billion won in sales.