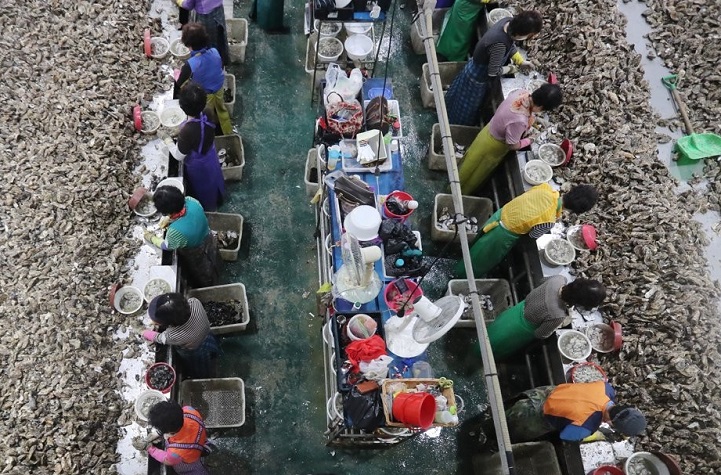 Women are at work at a facility for shelling oysters in Tongyeong on South Korea’s southern coast on Oct. 17, 2019. (Yonhap)

SEOUL, July 21 (Korea Bizwire) — Oyster and shellfish waste that have become an environmental concern due to lack of processing methods will be recycled at a steel mill.

Hyundai Steel Co., South Korea’s second-biggest steelmaker, said Tuesday that it will use the lime powder made by processing shellfish and oyster shells for the sintering process.

Sintering refers to the process of transforming iron ore in a powder state into a state suitable for furnace injection. In general, limestone is added in this process to improve productivity and reduce fuel costs.

Hyundai Steel started developing technology to replace limestone with shellfish and oyster shells in the sintering process from 2014, and confirmed the possibility of replacement through operational tests.

Thereafter, the company completed an evaluation of quality and environmental impact through mock-up tests.

If the company receives approval from the state-run National Institute of Environmental Research, it would become the nation’s first steel mill to recycle shellfish and oyster shells.

According to the Ministry of Oceans and Fisheries, about 300,000 tons of oyster and shellfish waste are generated every year, of which about 230,000 tons are left unattended, while the remainder is used for animal feed and fertilizer.

At present, more than 1 million tons of oyster and shellfish waste remain abandoned in the country.