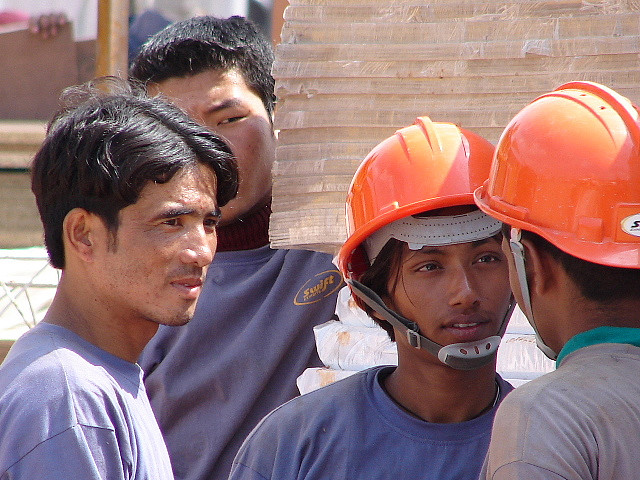 While part-timers in their 20s are rushing to construction sites, on the other hand, the construction companies are increasing the portion of migrant workers in the working sites. (image: ไปไหนมา /flickr)

SEOUL, July 9 (Korea Bizwire) – Amid the severely high unemployment rate, youths in their 20s are rushing to construction sites for part-time jobs, according to a recent survey. Meanwhile, the construction companies are filling the vacancies with mostly low-cost foreign workers.

This is the cross section of the distorted labor market in Korea that younger generation people are pressed hard to find jobs while in other places jobs for domestic workers are decreasing.

The Construction Workers Mutual Aid Association on July 7 released a report of the annual statistics, the first analysis of the 4.26 million workers registered in the association’s computer network.

According to the report, as of the end of December last year, among the construction workers youths in their 20s accounted for 10.2 percent, surpassing the 10 percent mark for the first time. Their share was only 5.5 percent in 2009 and has since increased on average 1 percentage point annually.

An official in the association said, “Among the types of employment, construction workers in their 20s are working temporarily and their numbers are increasing annually, which seems to be related to the high youth unemployment rate.”

In fact, among 620,000 workers who worked on a temporary basis last year, 14.7 percent were in their 20s, much higher than their total share of 10.2 percent. Even then, the number was higher than 14.6 percent of those in their 30s. The statistics showed that the youths in their 20s worked as manual workers as short-term part-time jobs.

While part-timers in their 20s are rushing to construction sites, on the other hand, the construction companies are increasing the portion of migrant workers in the working sites. Last year, their portion increased to 6.7 percent from 5.5 percent in 2009. By age group, foreign workers in their 50s marked the largest portion with 32.0 percent, followed by those in their 40s (30.8%) and 30s (16.3%).

The association’s official said, “If young foreign workers keep coming in the labor market, the replacement of domestic workers by foreign workers will be intensified. The government should prepare for the countermeasure to this trend.”

Meanwhile, according to the National Statistical Office, as of the end of May this year the unemployment rate among those in the younger generation aged 15 to 29 recorded 8.7 percent, 1.3 percentage point rise over the same month of the previous year.