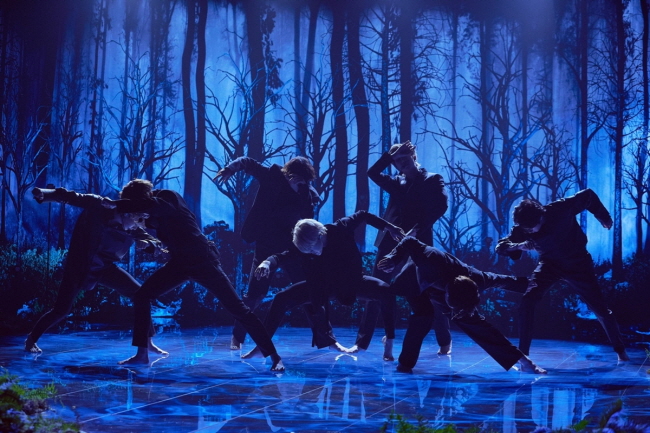 This photo of BTS’ performance of “Black Swan” during “The Late Late Show with James Corden” on Jan. 29, 2020, was provided by Terence Patrick via Big Hit Entertainment.

Against the backdrop of a forest in the blue light of dawn, the performance on the CBS show “The Late Late Show with James Corden” turned the seven BTS members into seven black swans fluttering and gliding on a quiet pond.

It was the first time the single — released Jan. 17, ahead of the associated album, “Map of the Soul: 7,” set to drop Feb. 21 — had been performed in public.

Previously, only a video featuring the Slovenia-based MN Dance Company’s choreography for the song had been released, leaving fans guessing how the band would render the track onstage.

Ahead of the performance, BTS also talked about their new album, “Map of the Soul: 7,” with the show’s host, James Corden.

“Seven is a special number for us. It’s been seven years since our debut, and we got seven members,” BTS leader RM said, referring to the album’s subtitle.

He said the band practiced the new album’s tracks and their dance routines “so hard.” Addressing fans, he said, “So please stay tuned for the album. The album’s gonna be a whole (new level).”

RM couldn’t finish his sentence due to deafening cheers from the audience. 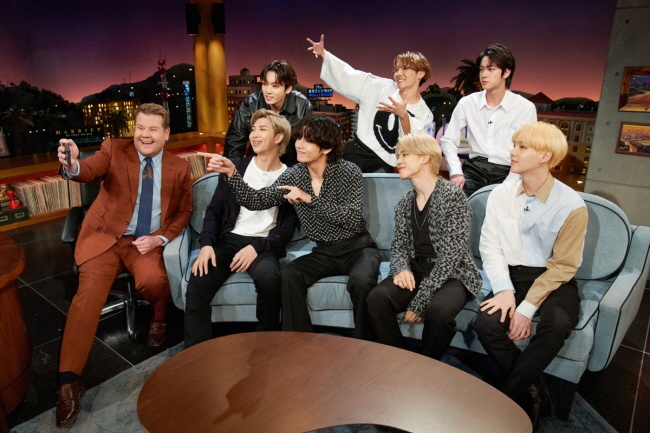 This photo of BTS’ appearance on “The Late Late Show with James Corden” on Jan. 29, 2020, was provided by Terence Patrick via Big Hit Entertainment.

Corden said his show has had “incredible support” from BTS fans whenever the band has appeared on the program, adding that many people in the audience Wednesday camped out outside the studio overnight before the live show.

Delivering a message to the band’s dedicated fans, known as ARMY, member V said, “We want ARMY to be happy through our music. We will be there for you.”

Having become the first Korean act to perform at the Grammys this week, BTS also said that K-pop has finally been recognized in the global music scene.

“We felt like K-pop was finally recognized worldwide,” RM said.

The K-pop septet appeared alongside rapper Lil Nas X to perform “Old Town Road” during the 62nd annual Grammy Awards ceremony on Sunday at the Staples Center in Los Angeles, making them the first South Korea act to do so.

“Everything about that night was so special. We couldn’t believe it,” member J-Hope said, recalling the moment.

Rapper Suga said the band will return to the Grammy stage for a second time: “We are going to do BTS Stage Two.”