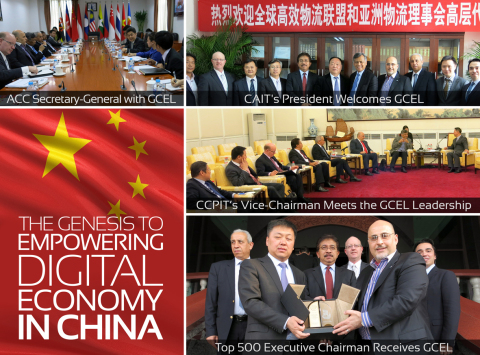 The strategic discussions addressed China’s leadership in empowering the Digital Economy through HumaWealth Program. HumaWealth is a global program that promotes trade efficiency through a Digital Economy Platform that harnesses the power of 21st century technology.

Senior representatives from the Organization of Islamic Cooperation (OIC) and China also discussed how HumaWealth can create the world’s largest Trade Efficiency Bloc representing 40% of the global population.

As a first step towards implementing the Digital Economy, GCEL conducted Trade Efficiency Assessments in G20 countries Indonesia, India, and KSA as well as Malaysia along with their respective government and private-sector experts.

Dr. Hzaine shared OIC’s perspective saying: “We must use digital tools to increase trade efficiency and promote trade between OIC and our trade partners globally and China. The reduction of OIC trade-costs will allow China to expand production capacity and build the buying power in low- and mid- income countries, thus minimizing China’s dependency on high- income counties and alleviate its currency valuation pressure.”

During the 9th Annual World Islamic Economic Forum (WIEF) in London GCEL and ICDT executed an MOU to deploy the Digital Economy globally.

Dr. Surin shared his views from an ASEAN perspective stating: “Through the Digital Economy we can enlarge the global trade market and create a win-win situation. We must transform today’s protectionist trade policies to an execution plan with the tools to increase trade within ASEAN and with its Asia trade partners.”

Mr. Zhao Yan, Executive Chairman of The Top 500 China Foreign Trade Enterprises Club, exclaimed, “We would be pleased to execute an MOU with GCEL to conduct China’s Trade Efficiency Assessment as this initiative is important for our members.” Mr. Yan emphasized that China’s Top 500 who represent 40% of China’s trade “suffer overseas due to problems with trade and logistics.”

Tan Sri Abdul Rahman stated, “This is an unprecedented global initiative, founded on providing an equal opportunity process for more than 56 qualified public and private organizations from around the world to govern and to deploy the Digital Economy.”

H.E. Yu Ping, CCPIT Vice-Chairman, welcomed a future Think Tank Session to explore the opportunities for China’s Digital Economy leadership affirming, “HumaWealth is important to our members and responds to the Premier’s call for more openness and transparency in China’s economy.”

Captain Salloum, GCEL Co-Chairman, commented as to the positive reception by China’s leading trade organizations stating “Throughout our sessions in Beijing, we received consistent, spirited messages confirming that China is targeting the fields of innovation and services as the next frontiers for its global leadership.”

GCEL plans to conduct Trade Efficiency Assessments for the remaining 15 G20 countries in order to bring the voice of the people to their leaders during the 2015 Turkey G20 presidency.