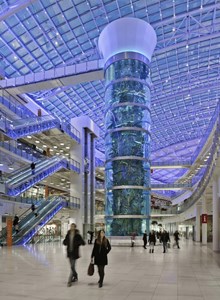 The aquarium, designed and built by International Concept Management (ICM), is a staggering 23 meters tall and is viewable from all four levels of Europe’s largest shopping center. (image: ICM)

MOSCOW, Dec. 8 (Korea Bizwire) — The world’s tallest cylinder aquarium was recently revealed to the public at the new Avia Park Shopping Center in Moscow. The aquarium, designed and built by International Concept Management (ICM), is a staggering 23 meters tall and is viewable from all four levels of Europe’s largest shopping center.

With millions of annual visitors, the intent of the aquarium was to enhance the shoppers’ experience and serve as a focal point for the mall – and ICM delivered. “From a visual standpoint, looking up at a freestanding water column this tall, is truly awe-inspiring,” said Andrius Vengalis, Project Manager for ICM. “This new aquarium will serve as a focal point for not only the shopping center and its visitors, but also the community.”

The aquarium holds 370,000 liters of saltwater and nearly 2,500 fish. Due to the extreme depths of the tank, it is necessary for divers to make multiple decompression stops. The exhibitry, which replicates the Red Sea, houses multiple platforms for the divers to take such precautions.

ICM was the turnkey contractor on the project – that included everything from concept design; to designing, sourcing, and installing the reef in the tank for a safe and functional environment for the livestock; selecting and sourcing fish that successfully cohabitate; and providing the lighting and filtration systems for the aquarium. ICM will provide ongoing operations and maintenance.

The exterior of the aquarium is 23 meters tall and 6 meters in diameter. The aquarium shell consists of 55 metric tons of acrylic, provided by Reynolds Polymer Technology. This aquarium not only broke world records, but was a monumental success for ICM as well. Nathan Reynolds, VP of Operations, remarked, “Each of our projects take on a special meaning to the team, and this one will stand out as an excellent example of what we can achieve when challenged by a client. The project turned out exactly as we envisioned it and will certainly establish itself as a landmark within a beautiful mall in Moscow, Russia!”

At International Concept Management (ICM), we create unique destinations that inspire, educate, and entertain. ICM is a leading firm with broad capabilities and services ranging from: design and engineering, construction management, operations and development.